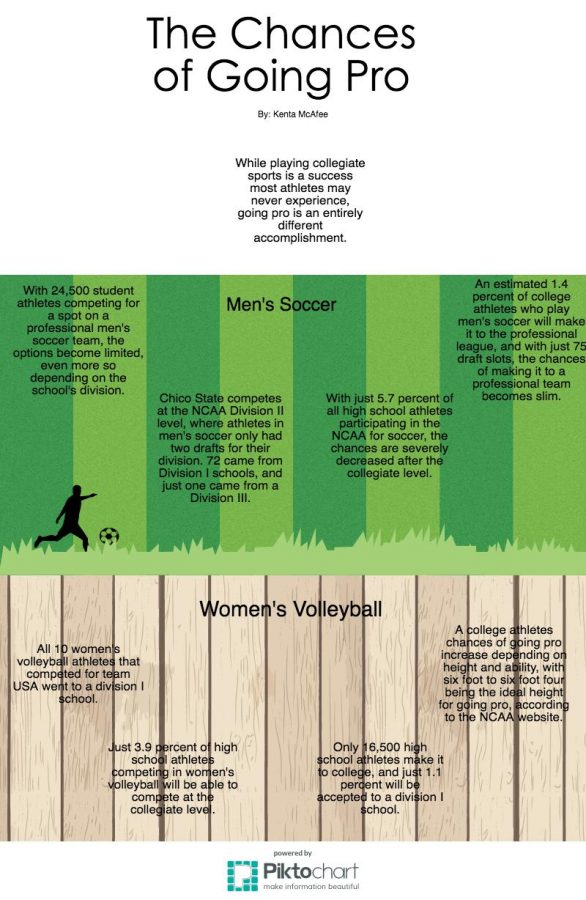 As their time as Chico State athletes comes to a close, the seniors’ lives are just beginning. With graduation in the spring, they start to set their eyes toward the future, and student athletes decide whether to make use of their degree or chase their dream and go pro.

After playing almost four years of college sports, the student athletes have important decisions to make regarding their career. The decision to leave behind the sport they’ve spent years cultivating, or to trying to compete at the next level depends on the athletes’ talent in the sport, and primarily on their own opinion.

“Since I was a little kid, I wanted to play pro. That’s why I pushed myself as hard as I could to make my dreams come true,“ senior soccer player, Omar Nuno said.

Senior volleyball player Torey Thompson was unsure about playing after college but intends to focus on finishing school and getting her degree. Thompson said that she was happy to be given the chance to play at the collegiate level.

“With this potentially being the last season to step on the court, it makes me that more excited to get out on the court and make our season memorable,” Thompson said.

Nuno, a criminal justice major, had thoughts about using his degree to land a career in the California Highway Patrol. Although Nuno has dreams to become a police officer, The Sacramento Republic, a semi-professional soccer team, has been scouting Nuno and have taken an interest in him.

Although his childhood dream would be fulfilled playing soccer for a living, Nuno has not shut out other options. Nuno said that he would make more money starting as an officer. If he chose to do what he loved by choosing soccer, he would never feel like he was working a day in his life.

Jacki Kreymborg doesn’t shut down the idea of playing volleyball after college, but she said she wants to be a collegiate level volleyball coach.

“I won’t be stepping away completely from the game. just taking a different route,” Kreymborg said.

Kreymborg said that she felt if there was an opportunity to coach or play, she would take it, because she would consider it to be a once in a life time opportunity.

Throughout their times as collegiate athletes, all three athletes stated that they appreciated the time spent with their teammates. Thompson said that even though she would be leaving the team, she still felt like she would be a part of it.

“Knowing my teammates have my back behind me,” Thompson said.

In order to make the best of their seasons, lives and potential future careers as athletes, Nuno, Thompson and Kreymborg talked about giving it their all, because their college sports days are nearing the end.

“I’ve made my best friends, and future bridesmaids playing this sport, “ Kreymborg said.