Four artists to draft to your music fantasy team 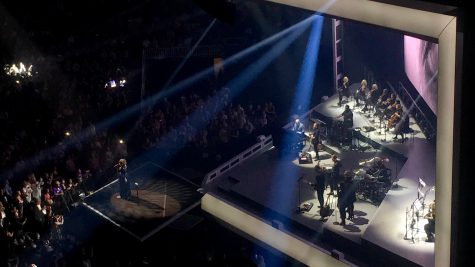 With football season in full swing, millions have been tasked with building a fantasy football roster. Like the NFL, today’s league of musicians are full of eager rookies, seasoned veterans and everyone in between. Let’s look at four artists we’d draft to our team:

Following her split from Blake Shelton, Lambert fell silent until the release of her single “Vice” graced radio airwaves in late July. The track shot straight to number one on Billboard’s Digital Country Songs chart and offered a glimpse into her sixth studio album due later this year. Looking ahead to the sophisticated songwriting and organic emotion expected on the redemption record, all bets are on Lambert to place country music back on the map in a way only she can. Much like Adrian Peterson on the goal-line, you can count on Lambert to deliver time and time again, carrying the team to victory.

Bay Area native G-Eazy has taken the world by storm blending the swagger of old school rap with the dynamics of today’s mainstream pop. Following the success of his hit, “Me, Myself and I,” G-Eazy has been found slaying verses along with the biggest names in music including pop sensation, Britney Spears. The allure of G-Eazy’s bad boy image and raw talent solidifies his place as a heavy-hitter within the business. As his commanding presence continues to grow, one can only assume the best of Young Gerald is yet to come. Similar to wide receiver Odell Beckham Jr., G-Eazy’s influence has lived under the radar, but after an opportunity for a big play, he has left the world in awe of his talent and style.

Combining the intensity of rock with the pulses of rap, duo Tyler Joseph and Josh Dun have transcended the paradigms of album diversity with their chart-topping “Blurryface” released in 2015. The band’s creativity earns their spot on the team, as they sought out producers song-by-song, despite being cautioned to stick with one sound. It’s safe to say their high risk has harvested high reward. Their single “Stressed Out” burst on the scene in Feb. 2016 reaching the second spot on Billboard’s Hot 100. Since then, Twenty One Pilots has secured two more top ten songs while simultaneously embarking on an arena tour. Reminiscent of Seattle linebacker, Bobby Wagner, Twenty One Pilots can be overlooked by their peers, but can guarantee to come up big when least expected.

Although Adele’s singing voice is second to none, it is her keen business sense which has earned her spot among music’s most influential. Upon the release of 25, the then-27-year-old challenged digital music dominance by withholding the album from streaming services. Stunningly, 25 sold an unprecedented 7.4 million albums in the last six weeks of 2015. This triumph was illuminated once more when more than 10 million concert hopefuls attempted to buy one of the 750,000 available seats for Adele’s worldwide tour, according to Ticketmaster. With numbers this impressive, the singer’s ascendance is linked to her ability to say “no” – a word foreign to most pop stars. Whether it be turning down a Super Bowl performance, or remaining free of brand endorsements, the singer’s dignified standards and instincts have made her absolutely priceless to the global stage. Adele’s larger-than-life voice and personality create an overwhelming presence evocative of Brett Favre. Like a quarterback, Adele remains steadfast and strong. Although, she may drift into occasional retirement-like phases, she is sure to come back better than ever resulting in thrilling victories.