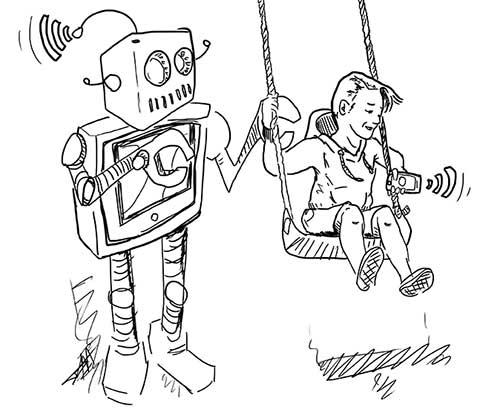 On a weary Wednesday afternoon, a family rests together in their home. A high-school senior sits cross-legged, focused intently on the latest match of Overwatch he’s been playing on the living room TV. His younger sister lies on her stomach next to him with bright white earbuds plugged into her ears, watching Netflix on a laptop. In the kitchen, their father silently scrolls his finger across his phone as he catches up on his Instagram feed. His wife sits down next to him and catches up on the national news on her iPad.

Sights like this are increasingly common as technology becomes more and more ubiquitous in daily life and in families. With 90% of households in America having three or more Internet-connected devices and with teenagers spending an average of nine hours a day in front of a screen, it is safe to say that technology is now a key piece of the American household.

The ever- increasing screen count in our homes is creating a divide in the family. Children spend most of their time playing video games, texting or watching TV while parents are either on a device themselves or not connecting with their children. This lack of quality time is leading to several negative repercussions. Children are not seeing healthy interactions from their parents’ relationships as much as unhealthy ones that are often displayed on TV. Family values are being replaced by the values shown on social media and the internet. Kids are spending less time interacting with their peers in person, leading to less socially competent adults.

Of course, technology’s pervasiveness in the home is still a very new phenomenon. In the past 20 years, it has gone from being a small aspect of homes to become an all-consuming force within households. Because of this newness there is not much information on how the coming-of-age generation will be affected by their new Internet-connected upbringing.

One positive outcome of this is that they will likely be the most technologically savvy generation to date. However, they might also lack many real world skills usually passed on between parents and their spawn.

There is also the strong possibility that they will be incredibly monolithic in thought and opinion. Having been raised largely by popular culture in the form of social media and television, as well as the secular public education system, the majority of a technology-raised generation will be of one mind.

Losing the diverse pool of thoughts that America has come to hold over the past several centuries would be a tragedy. Nothing has distinguished us more from every other country in history than the unprecedented freedom of speech and vast diversity that our immigrant nation has held. A nation that is largely unified in thought on all issues and suppresses dissenting points of view would be such a large loss.

As we swim in the midst of a sea of screens, let us take a moment to set down our phones and reflect on the repercussions of our pixel-driven lifestyles. The only way to prevent a complete upending of society by the screens is to fight on an individual level to preserve some of our real world interactions.

So be content to enjoy a quiet conversation with a friend while keeping your phone, lousy with notifications, at rest in your pocket. Find time each week to set aside your litany of connected devices and reflect quietly on your own life and place in the world. If we can find a healthy balance between using the electronics that we are lucky to have and spending time rooted firmly in the real world around us, our nation and our families will be all the better for it.