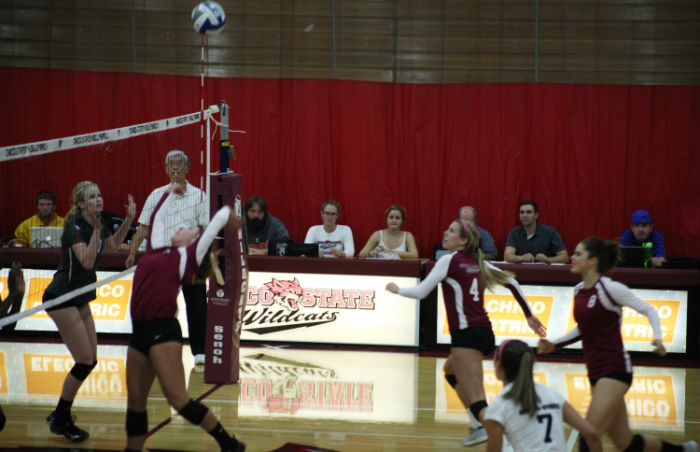 The Chico State women’s volleyball team competed in the second and third rounds of the Division II West Region Volleyball Showcase on Sept. 9 but lost 0-3 in both games.

The losses snap the ‘Cats four-game win streak and brings their overall season record to 4-3. Chico State had not previously faced a 0-3 loss this season.

The first set remained close with two lead changes and three ties until the Eagles managed to score four consecutive times, because of two kills and two errors. The Eagles held onto their lead and won the set 25-19 to give them a 1-0 lead in the game.

While the Eagles scored the first point of the second set off an attack error by the ‘Cats, Chico State quickly forced a 1-1 tie. The set was a hard fought match with the largest lead in the game belonging to Concordia at four.

Although the ‘Cats were able to keep up with the Eagles, they were unable to overcome the early lead Concordia amassed, despite forcing an extra play in the set. The Eagles were able to close the second set with two kills, to give them a 26-24 win, and a 2-0 lead in the game.

Concordia took the first two points of the set off an attack error and a kill. The ‘Cats and the Eagles both had error trouble in the final set. Concordia gave up seven and Chico State had six.

The Eagles early lead soon expanded to six, which they held onto until the end of the set to give them a 25-23 win. The ‘Cats were able to diminish some of Concordia’s lead but lost because of the errors they made late in the game, with the Eagles final point coming off an attack error by Chico State.

Chico State was able to score the first three points in the first set over the Western Oregon Wolves and held a 14-7 lead. While the ‘Cats early success on offense seemed to pick them up from their previous loss, they were once again plagued with errors late in the game.

The Wildcats committed five errors in the first set, which gave the Wolves the lead, and contributed to two of the five consecutive points Western Oregon was able to score to close out the set. Two service aces and a kill ended the set for the Wolves, giving them a 25-20 win, and a 1-0 lead in the game.

Errors determined the first three points of the second set, with the Wolves coming out in the lead 2-1. Western Oregon took a commanding nine point lead in the set after several small successions of kills and maintained it through committing two fewer errors than Chico, and relying on their setters.

The ‘Cats played a closely contested third set with their back against the wall, as they earned the first two points of the set and allowed only a three point deficit. The set had seven ties and five lead changes, with both teams struggling to get ahead,

Three errors and two kills gave the Wolves the final five points to close out the game with a 3-0 win and a 26-24 win in the set. While the Wolves committed seven errors in the final set of the game, they were able to retake their lead because of the success of their setters and efficiency of their hitters.

Kenta McAfee can be reached at [email protected],com, or on Twitter @KentaMcAfee.