WNBA remains out of reach 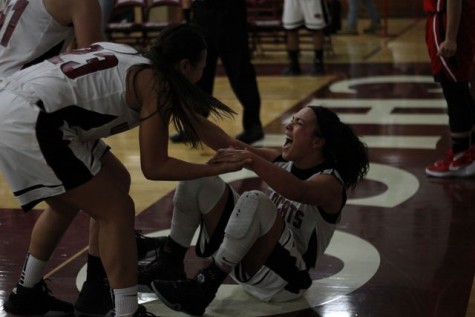 Whitney Branham receives help getting up after knocking down a shot. Photo credit: Jacob Auby

With preseason starting in a matter of weeks, the Chico State women’s basketball team is preparing to have a better season this semester, after ending last year with a six-game losing streak. While there are many talented players on the women’s roster, the WNBA is not the goal for most players on the team.

Although players from the WNBA recently won their sixth consecutive gold medal for Team USA in the 2016 Olympics, the money in their contracts does not reflect their accomplishments. Rather than focus on a career in basketball, many female athletes are encouraged to start families or pursue other careers as a result of the low paying profession.

The Chico State women’s basketball team said they felt the pressure of pursuing other goals, with their sport being improperly compensated and unappreciated. Most of the team had already planned out other careers outside of basketball, instead of attempting to go pro as a result of the discrimination toward the WNBA.

Senior shooting guard Sherise Porchia started all 26 games last season for Chico State but does not see herself playing at the professional level. Porchia said that she has plans of mastering in social work after graduating because the possible jobs in the field offer better financial stability.

A major factor in Porchia’s decision was the lack of funding received by the WNBA. In comparison to the million dollar salaries of most seasoned NBA players, the WNBA players earn a maximum $100,000 after being considered veterans in the league.

“There is such a huge difference in the pay between the NBA and the WNBA,” Porchia said.

While going overseas can double the pay for athletes, it’s rare for players to enter other leagues and have long enough careers to gain the needed experience.

Newly drafted WNBA player’s struggle with financial difficulty when first entering the league, as the average salary for a rookie player is $38,000. The NBA’s rookie draft salary is over $2 million in their first year.

Breaking through the stigma:

Junior guard Whitney Branham led the Wildcats in a 3-point shooting percentage last season but has given up on her goal to go pro. Branham has decided instead to chase her dream of helping people and becoming a doctor.

Branham said she felt there was a stigma towards women going pro, and that men are given more opportunities to make it to the pros and are expected to strive for an athletic career.

“I feel that men are encouraged to focus more on athletics than women are, especially when it comes to making it to the professional league,” Branham said.

The players also expressed the stigma behind joining Division II sports, since most athletes are taught that playing at a Division I school is the only way to have a professional career.

Branham said that she felt there was only a small difference between the leagues, and that the level of experience the athletes are able to gain was equal.

“There’s such a small distinction between Division I and Division II that it shouldn’t stop people from joining because it’s all about the experience and doing something you love,” Branham said.

The difference in divisions is only a matter of hard work according to Porchia, who said she felt some athletes were discouraged by playing at a lower level.

“People don’t really know the difference between Division I and Division II. The athletes in Division II are just as hard working even though it’s not DI competition,” Porchia said.

With only 36 draft slots in last year’s WNBA draft, 33 picks were from NCAA Division I schools. Three of the picks were chosen from international players who did not attend United States colleges.

Branham’s father was the motivating factor that made her decide to play basketball after he failed at attempting to go pro.

Branham’s father’s dreams of playing professionally were cut short after constant disagreements with his college coach. Branham realized how critical a coach could be in attempting to go pro, and instead chose to focus on school and a career in education

“He always told me to also make sure it was a school I enjoyed, and not an athletic program. I followed the advice and I love it here,” Branham said.

While Townsend has chosen not to attempt a career in professional basketball, she did believe that it was becoming more of an option to women athletes.

“I’ve seen more programs in my hometown for girls who want to get involved with sports and I think some of that stigma is going away with women leading in everything from politics to the Olympics,” Townsend said.

With financial instability, limited opportunities, and negative stigmas affecting the choice of women basketball players to go pro, the players seek other careers to dedicate themselves to.

Cydney Nance can be reached at [email protected] or on Twitter @Cydneyna.