Cemetery of the ‘Not Forgotten’ 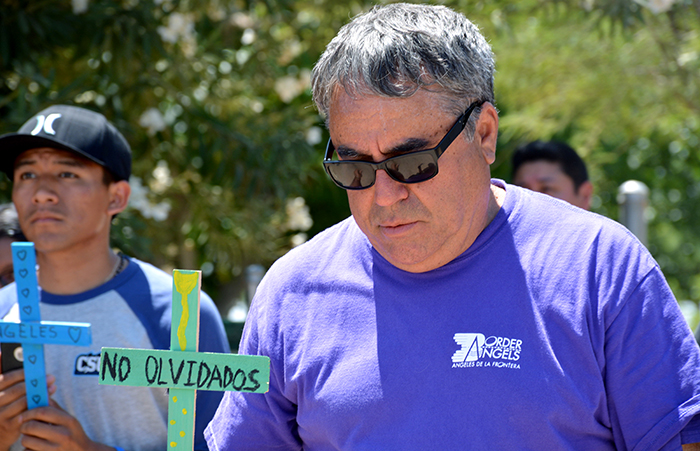 Nestled in a dusty patch of the Imperial Valley desert lies “El Panteón de Los No Olvidados,” a resting place for broken dreams.

At least 240 migrants lie in final rest in unmarked graves in a desiccated patch of ground behind the Terrace Park Cemetery in Holtville. It is North America’s largest mass grave and most massive non-military burial ground of unidentified dead in the United States.

Most of the humanity has long forgotten the unidentified dead of Holtville, but not everyone. “Los Angeles de la Frontera”–Border Angels–watch over them. Members of the all-volunteer human rights organization defiantly refer to the acre of the unknown as El Panteón de Los No Olvidados–The Cemetery of the Not Forgotten.

Rows of pauper’s graves lined with dirt and bricks for headstones are the final resting places of hundreds of John Doe and Jane Doe migrants. The hidden cemetery was placed in Holtville as a result of a large amount of migrant deaths in the Imperial Valley region after the border wall was built.

“None of these people expected to die when they crossed the border to find work,” said Border Angels founder Enrique Morones. “They thought they would make it. There have been women in dresses, who thought that in a few hours they would be safe and sound, found dead in the mountains frozen to death or dead from thirst in the Imperial Valley.”

Morones said the number one cause of death along the U.S.-Mexico border is dehydration. One such victim was 5-year-old Marco Antonio Villaseñor who crossed with his father and a group of 18 men. 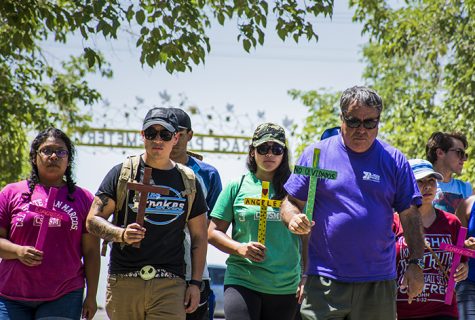 Morones leads the Border Angels two hours east of San Diego on pilgrimages to pay homage to the hundreds buried in Holtville when they receive permission to do so every five to six weeks. They pray, reflect and sometimes hold mass there; leaving stones, flowers and crosses, comforting the dead and unknown bodies of not just male adult migrants, but also women and children.

They are accompanied by activists, strangers and doe-eyed college students who are aware of the situations of undocumented immigrants but come to see it first-hand. Men and women from all walks of life routinely begin to sob or break into tears as they soak in the enormity of what lies in the ground below their feet.

“A lot of people do not realize the impact of all of these people dying, so when they see this they are very moved and there’s something comforting about seeing flowers or crosses or stones on the graves,” Morones said. “There was a time when we had them on all of the graves, but the graves are so fragile that if you walk (over the older graves), they’ll collapse.” 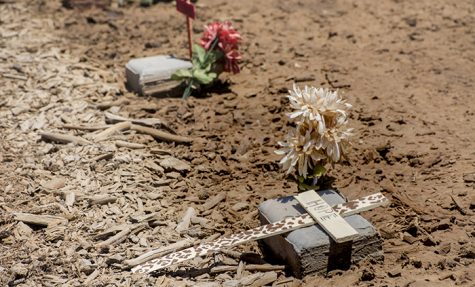 Migrant burials come to a halt

Hundreds of more recent dead migrants would have been buried in Holtville were it not for the U.S. government’s decree that migrant bodies be cremated rather than buried. Cremation prevents future DNA testing that could help to identify the victims, Morones said.

“We really need to find who’s buried here,” he said. “If we could match even one person, that would be the world to that one family because they will know my husband didn’t leave me, he didn’t remarry, he was lost looking for work.”

America makes extraordinary efforts to identify soldiers, accident victims and murder victims, Morones said, however virtually no effort has been made to identify the souls out back behind the Terrace Park Cemetery.

“Even in death they are marginalized,” he said. “You don’t see grass or headstones or their names. You don’t see anyone trying to find out who they are. I’ve brought government officials here from different countries to see if they could do some DNA studies and they say, ‘well they might not be from our country,’ and I say yes, but they are all human beings.”

During the Clinton administration in 1994, the Border Patrol implemented Operation Gatekeeper to stop illegal immigration occurring on the U.S.-Mexico border near San Diego. The implantation of Operation Gatekeeper in 1994 and the Secure Fence Act in 2006 from the George W. Bush administration has militarized the border. Morones said it has made it tougher for people to leave the U.S. and return home after finding work.

“Rather than risk their lives in the deserts, mountains, rivers and oceans every year, the migrants do not leave,” he said. “More than 11,000 human beings have died crossing the border since Operation Gatekeeper.”

John Hernandez, a longtime resident of the Imperial Valley, agreed. He said the immigration situation started to go very bad in 1994 but was exacerbated by September 11, 2001.

“Since Sept. 11, the satellites, sensors, cameras and drones have changed everything,” he said. “Before that, there were a lot of people that could come back and forth with minimal problems.”

“They should get in line”

Militarization of the border has been a boon to one set of entrepreneurs, “Coyotes”, human traffickers who charge exorbitant fees to migrants to smuggle them into the U.S. Morones said American policy fuels coyotes because of its strict restrictions on legal work visas for Mexicans and Central Americans who are not considered economic or political refugees.

“There are 250 million undocumented people in the world,” he said. “The U.S. only has 11 million, so most aren’t coming here. Of that 11 million, easily 35 percent did get a visa and they have a work. But for today’s migrants, there’s no legal way to come. So when people say they should get in line, I say they would love to, but there is no line. They don’t qualify for a visa and people don’t realize that.”

Gerardo Mireles, Chico Spanish instructor and M.E.Ch.A adviser agreed. He came across the border from Baja California because his grandfather was part of the Bracero Program, a U.S.-Mexico farm labor agreement that later provided visas for farm workers and their families. Mireles said it took 15-25 years for his family’s visa to be processed. He said his grandfather filed the visa application the weekend after his parents were married, but he was 17 years old when the visa letter came.

“This is why when politicians say that our system is broken, it is broken,” he said. “I’m not saying that everyone should be approved, but they should at least have an answer sooner than in 20-something years.”

Mireles said economic hardships are the main reasons why people want to obtain citizenship in the U.S.

Moving to the United States has afforded him an opportunity that may not have happened if his parents had decided to stay in Mexico, Mireles said.

“My father and mother saw that if they brought their kids to the United States, there was a chance for us to do something better,” he said. “And I have to say that my younger brother and I are both college professors, something that I don’t think would have ever occurred if we had stayed in Mexico.”

Many never acquire a visa

“Many mothers are deported because they encounter emotional and physical abuse from their husbands,” he said. “Once they are separated, it is difficult for them to acquire a visa. Most of the deported mothers do not even know they have the right to apply for a visa.”

Morones recounted the tragic story of migrant Lucrecia Dominguez, who wanted to cross to reunite with her family. Her attempts to get a visa were rebuffed, so she hired a smuggler, which on average can cost from $5,000 to $7,000.

“She wanted to cross to be with her family,” he said. “She contacted a smuggler. The smuggler said I’m crossing a group tomorrow, but don’t bring those two little kids with you, Jesus, her 15-year-old son, and Nora, her 7-year-old daughter. If you bring them they are going to slow us down and the Border Patrol might catch us.

“But her whole purpose is family reunification, so, of course, she brought them. And as they’re crossing, the smuggler gets mad and abandons them. So Lucrecia is by herself with her two children in the middle of the desert. Lucrecia Dominguez literally died in the arms of Jesus, her 15-year-old son Jesus. This is happening every day because of the border wall.”

Trump and his supporters have it all wrong about immigration, Morones said. While some want to build more walls, he said we should have humane policies.

“It’s just the wrong message,” he said. “In the 1980s President Reagan said, ‘Mr. Gorbachev, tear down this wall.’ But, in the 1990’s the United States built a wall and that wall has lead to what we estimate to be 11,000 people that have died. Whether it’s 11,000 people or one, these people should not be dying simply because they want a better life.”

Bianca Quilantan can be reached at [email protected] or @biancaquilan on Twitter.