A deeper look into Ron’s Reptiles 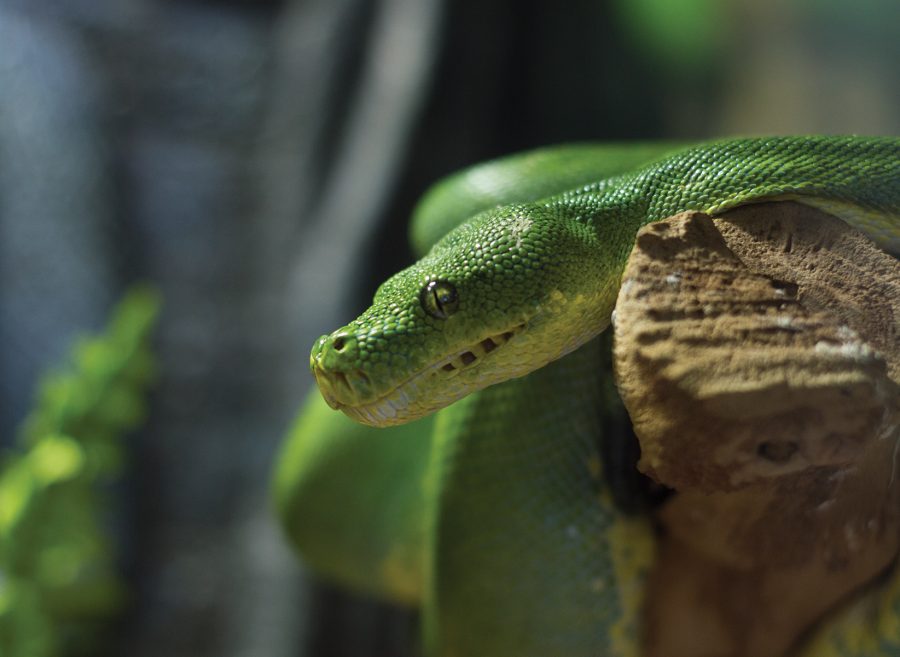 When Chico State alumnus Ron Greenberg mentions there are nearly 1000 reptiles on his one-and-a-half acre compound nestled in the rural foothills past the Chico Airport, this “hobby” of his begins to sound more like an addiction; an addiction that became the largest selection of reptiles in Northern California.

His business, based out of his home off Cohasset Road, is appropriately deemed “Ron’s Reptiles.” Open to the public since 2004, he continues to have regular visitors of all ages on a regular basis.

The shop is the retail site of dozens of terrariums neatly stacked and organized. Hundreds of smaller Tupperware containers occupied with babies of both common and rare species are also found throughout the house. Outside, there are two separate sheds with 3,500 rats and 3,000 mice that serve as food for the reptile residences.

From the 15-foot, 100-pound Burmese Python named Kaa, to the two Argentine Black and White Tegus, an exceptionally large lizard with very high intelligence, Greenberg makes it an educational experience for every visitor that steps through the front door, giving information on origins and genus—often turning one’s fear of reptiles into a fun and curious fascination.

Greenberg and his wife Donna visit local schools as often as four to five times a month, bringing a selection of snakes and lizards to teach kids about different parts of the world through his reptilian friends. For the last 20 years, the two have also grown prone to visiting reptile shows as often as 16 times a year.

“I love the opportunity to teach,” Greenberg said. “And I love living in a college community because most of our customers are Chico State and Butte College students.”

The high population of Greenberg’s reptile roommates came about by his 60 years of experience carefully breeding different species and his experience studying rare species from India, Sri Lanka, Thailand, Brazil, Costa Rica and importing them back to the United States.

He adopts reptiles from domestic residences when people decide they want to trade their Albino Boa for a cat or dog.

It was early as the age of five when Greenberg discovered his passion for reptiles. Growing up in a quiet part of the San Fernando Valley, he recalls having a difficult time finding children his age to play with in the desolate area so he resorted to making friends with the snakes and lizards that were found around his house. In high school, he realized people’s need for reptiles as pets and quickly acquired his license to import animals from overseas at the age of 15.

“I was importing my first reptiles into the United States before I had a learner’s permit to drive a car,” Greenberg said.

Greenberg made the decision to drop out of college 10 units shy of graduation at CSU Northridge and began his career with Berkshire Hathaway, a company owned by Warren Buffet soon afterward. He would return to school at Chico State and graduate in 1988 with a Bachelor of Science degree.

He didn’t fully return to his reptilian calling until 2004 when he retired after 31 years with Berkshire Hathaway. It was then that Greenberg began modifying his house and used the Internet to expand his business across the United States to what it is today.

As his reputation grew, his house on Cohasset Road would soon be a location that many would come to know when “Ron’s Reptiles” was featured on the front page of the Wall Street Journal.

The 2008 recession had an effect on everybody. People that once invested in the housing market began to invest in the rare reptile business in an effort to turn a profit. A reporter by the name of Justin Scheck spent two days on the property documenting Greenberg’s insight on the state of the reptile market.

“We got calls from all over the United States after that, ” said Greenberg. “I didn’t realize how many people read the Wall Street Journal (laughs).”

Though Greenberg has become a propagating, entrepreneurial expert in the reptile trade from a very young age, there is a sheer welcoming fascination found in every word when he begins talking about his hobby—something that he is prone to sharing with anyone that walks into Ron’s Reptiles.

Matt Manfredi can be reached at [email protected] or @matthewmanfredi on Twitter.