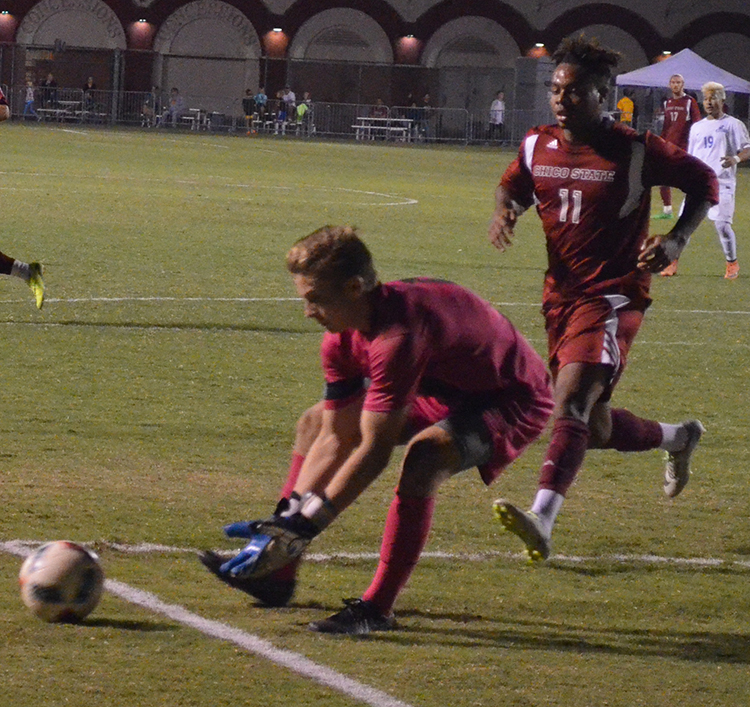 The Chico State men’s soccer team took on the Cal State San Bernardino Coyotes on Sept. 30 on the ‘Cats home field and won 2-0.

The win extends the ‘Cats overall record to 2-4-3 and their conference record to 1-2-2. The ‘Cats had not won in six consecutive games before succeeding against the Coyotes.

Senior forward Omar Nuno led the team’s offense by scoring early at the 18-minute mark, off an assist by first-year defender Alex Fluitt. The early offensive momentum Chico State built helped them remain in control of the ball, as they took 10 shots in the first half, compared to the Coyotes three.

Fluitt assisted on both goals Chico State scored, as senior forward Rajaee DeLane was able to increase the lead to 2-0 off a header in the first minute of the second half.

DeLane had yet to score this season but had a considerable increase in playing time this game, with 79 minutes compared to the 75 he’d picked up in the previous two games.

The Coyotes were issued three yellow cards in the game, while Chico State picked up one on junior midfielder Jesus Ramos, his third of the year.

Chico State returns to the field on Oct. 2 against the Cal Poly Pomona Broncos in the ‘Cats second home game of the season.

Kenta McAfee can be reached at [email protected] or @KentaMcAfee on Twitter.