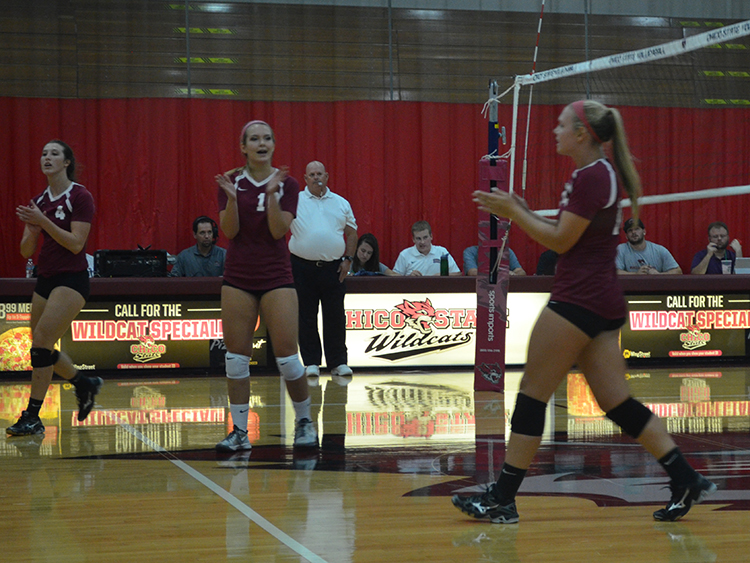 The Chico State volleyball team swept their third consecutive game Oct. 5 to improve their overall record to 11-4 and their conference record to 5-1.

The win came against the Stanislaus State Warriors and was the result of continuous errors that gave the ‘Cats the advantage. Chico State committed just 11 errors in the game, while the Warriors had 20.

Chico State was able to win their first set through the dominant play of junior outside hitter Olivia Mediano who had three kills and an ace. Mediano’s success on offense gave Chico State an early lead in the set.

The Wildcats were able to take a 12 point lead and closed out the first set 25-13 with a kill by first-year outside hitter Kim Wright. The ‘Cats earned a dominant lead due to the lack of errors made, and the offensive contributions of the entire team.

In the second set, Chico State committed only one error but earned nine of their points off mistakes made by the Warriors. The teams were nearly tied in their offensive tactic, with the ‘Cats collecting just two additional kills compared to Stanislaus State.

Chico State earned their last two points of the second set off attack errors and closed out the match 25-16.

Stanislaus State took a commanding 7-1 lead in the third set, after a succession of kills. The ‘Cats were able to overcome the deficit with three service aces by Wright, and two kills from first-year outside hitter Camryn Rocha.

The teams tied at 13, but Chico State quickly took the lead and maintained it until the end of the set. The ‘Cats were able to close out the set 26-24 and win the game 3-0 off a kill by junior outside hitter Anna Baytosh.

Chico State returns to the court Oct. 7 against the Humboldt State Lumberjacks on the ‘Cats home court.

Gabriel Moreno can be reached at [email protected] or @GabeSports3 on Twitter.