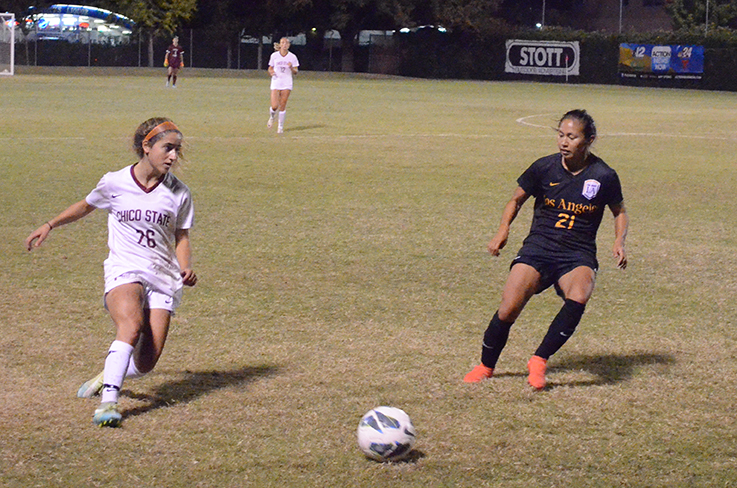 The Chico State women’s soccer team pulled out their first conference win Oct. 7 with a goal by senior midfielder Emily Shleppey to put the ‘Cats over Cal State L.A. 2-1.

The win brings the Wildcats overall record to 5-6-1, and their conference record to 1-6-0.

The Golden Eagles took the lead in the first half with a goal at the 21-minute mark. Cal State L.A. took only two shots in the half, while the ‘Cats took 11, but were unable to capitalize on their offensive advantage and trailed 0-1 going into the second half.

The lack of scoring in the first half was because of the effort of the Golden Eagles goalkeeper, who had eight saves.

Chico State was able to tie the game in the second half off a header by senior midfielder Lindsay Dias, her third goal of the season. Both teams displayed strong defense in the half with both making five saves.

The game was forced into an overtime period where the ‘Cats first-year goalkeeper Caitlyn Duval made a critical save to prevent the Golden Eagles from securing the win.

Chico State was able to make the final goal of the game at the 93-minute mark off a free kick from 50 yards out that deflected off the defender and rolled into the net.

Jordan Jarrell can be reached at [email protected] or @ChicoOrionJJ on Twitter.