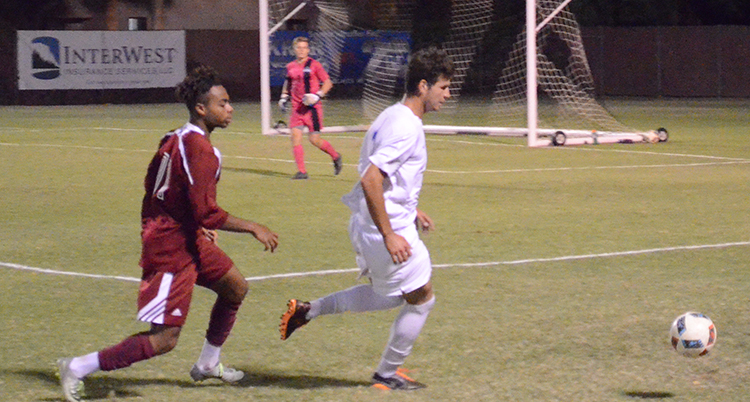 Rajaee DeLane rushes for the ball after being stripped by a defender Photo credit: Jordan Jarrell

Chico State scored within the first minute off first-year defender Garrett Hogbin’s first goal of the season. Junior midfielder Carter Johnson assisted on the goal by putting the ball in position through a cross pass.

Senior forward Rajaee DeLane was the second Wildcat to score in the game off an assist from first-year defender Alex Fluitt and senior forward Omar Nuno. The goals by Hogbin and DeLane gave Chico State a 2-0 lead in the first 10 minutes of the match.

Chico State was conservative with their offensive effort, making only two shots in the first half. Despite the low amount of attempts, the ‘Cats focused on taking quality shots and succeeded in getting ahead early.

The Toros and Wildcats racked up eight fouls in the first half, but Chico State earned an advantage when Cal State Dominguez Hills turned the ball over twice on offsides calls.

The Toros fought back in the second half with a goal at the 56-minute mark off a free kick. The ‘Cats quickly retaliated with another goal of their own from junior defender Frankie Palmer with 18 minutes remaining in the game.

Chico State was able to deploy a strong defensive effort with junior and sophomore goalkeepers Damion Lewis and Luke Dennison grabbing four saves for the ‘Cats in the game.

Chico State extends their season record to 4-5-3 and their conference record to 3-3-2. The ‘Cats return to the field Oct. 14 against Stanislaus State on the Warriors home field.

Makayla Hopkins can be reached at [email protected] or @_MakaylaHopkins on Twitter.