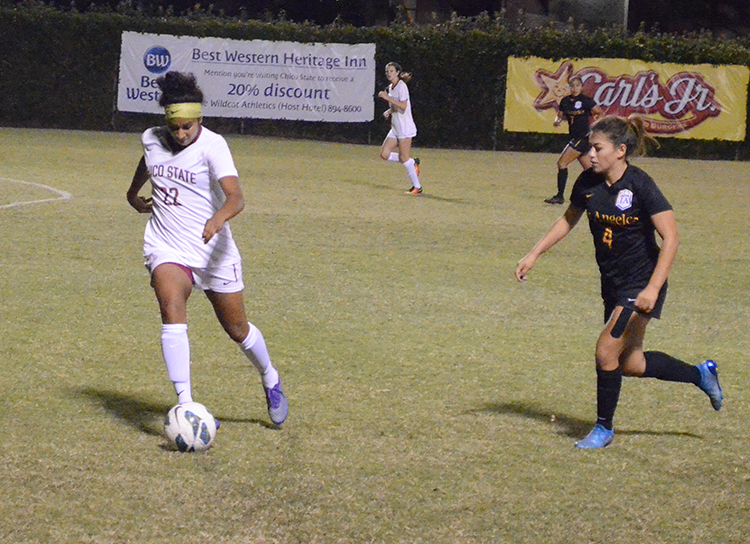 Pooja Patel dribbles the ball away from a defender during a 'Cats home game. Photo credit: Jordan Jarrell

The Toros were able to play a strong defense and keep the ‘Cats on their toes during the first half. Dominguez Hills gained early control of the ball and attempted the first shot of the game in the opening two minutes.

Both teams were evenly matched on offense and defense, as they struggled to gain an advantage. The first half ended with neither team able to pull ahead and the game entered halftime 0-0.

The second half opened with Chico State becoming more aggressive on offense, with a shot by senior midfielder Emily Shleppey in the first minute. The ‘Cats capitalized on their early offense and were able to attempt 11 shots in the half.

The Toros were able to survive the bombardment by the Wildcats and succeeded in scoring the first goal of the game at the 57-minute mark.

First-year forward Sarah Yang retaliated just 10 minutes later with her first career goal to tie the game 1-1. Yang shot the ball from 18 yards away and was able to get the goalkeeper out of position by beating her to the ball.

The team’s remained evenly matched with neither able to pull ahead until the 79th minute when senior forward Pooja Patel scored her second goal of the season.

The Wildcats held their 2-1 lead through the last few minutes of play to extend their overall season record to 6-6-1 and their conference record to 2-6-0.

Chico State will return to the field Oct. 14 against Stanislaus State on the Warriors home field.

Gabriel Moreno can be reached at [email protected] or @GabeSports3 on Twitter.