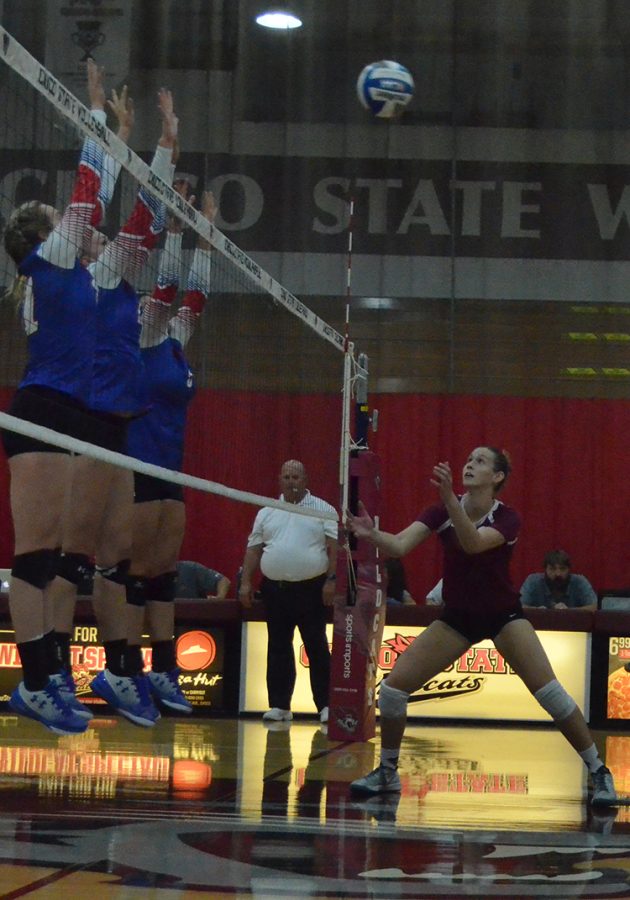 The Chico State volleyball team succeeded in extending their win streak to five Oct. 11 in their game against the Sonoma State Seawolves.

The ‘Cats won the game 3-1 and improved their season record to 13-4. Chico State leads their conference with a 7-1 record.

The Seawolves took an early 1-0 lead in the first set but were quickly tied by the ‘Cats. The set had 16 ties and five lead changes before Sonoma State closed out the match 29-27.

Chico State fought tenaciously to prevent the Seawolves from taking the first set but was overcome by Sonoma State’s offense.

Although the ‘Cats lost the set, Chico State played a stronger offense with 21 kills compared to the Seawolves’ 20. The Wildcats had a better offensive effort but faltered in the set by giving up six points on errors.

Chico State earned the first points of the second set but was evenly matched throughout the set by Sonoma State. The ‘Cats largest lead was five as both team’s battled for dominance in the set until Chico State pulled out a 25-23 win off an attack error.

The Wildcats entered the third set with the game tied 1-1. Despite the inability of either team to pull ahead in the previous sets, the ‘Cats succeeded in earning a dominant 25-17 win.

Errors plagued the Seawolves in the third set as they accumulated eight to give the ‘Cats the lead. Chico State outplayed Sonoma State on offense with 17 kills compared to the Seawolves 12.

The Wildcats took an early 5-1 lead in the fourth set off of four errors committed by the Seawolves. Sonoma State had a poor effort in the set, with just four kills and eight errors. Chico State closed out the final set 25-12 and the game 3-1.

Chico State returns to the court on Oct. 14 against Cal State Monterrey Bay.

Gabriel Moreno can be reached at [email protected] or @Gabesports3 on Twitter.