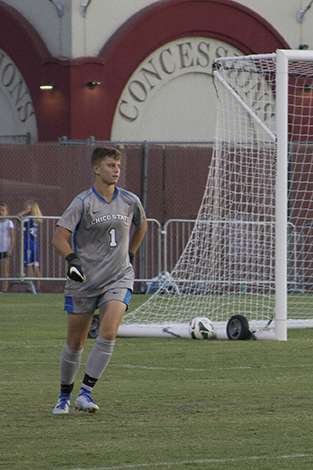 The NFL isn’t alone in the battle against concussions.

College athletic programs are following in the league’s footsteps to create a safer game for their athletes.

The NCAA Executive Committee adopted its Concussion Policy and Legislation in April 2010. The policy requires all affiliated schools to have a concussion management plan, including identifying the signs and symptoms to the return-to-play protocol.

Chico State’s Head Athletic Trainer Scott Barker works closely with the coaches and athletes to recognize the early symptoms of a concussion.

“In general we have about 5 to 10 incidents per year,” Barker said. “We can see it in any sport, but there’s many in soccer.”

Because of limited empirical-based guidelines, concussions continue to be one of the most difficult athletic injuries to diagnose and manage, according to the American Journal of Sports Medicine. After one concussion, the likelihood of a second occurrence increases drastically.

Abnormalities in the brain and motor function continue well beyond the typical time of recovery, according to a study done by the Congress of Neurological Surgeons.

Duval mentioned how tough it became not only to recover but to catch up in school and get organized in order to pass her classes.

“Having a concussion really does affect [your] schoolwork,” Duval said. “Most professors are pretty understanding, but you have the select few that don’t really care.”

In May 2014, the NCAA and U.S. Department of Defense launched a landmark initiative to enhance the safety of athletics and service members.

The new initiative made it a NCAA requirement for coaches to be educated at least once a year to respond to situations where athletic trainers aren’t present at games.

As a safety precaution, the initiative states that coaches are to immediately remove any player who shows signs of being concussed from play.

“Our coaches are very good about recognizing that and getting them out of the game,” Barker said. “Before we put them at risk for a second impact. That’s what we’re trying to avoid.”

The aftermath of concussions are severe, with altered motor control, deficits in mental and cerebral performance and verbal and visual memory all taking a toll, according to a study done by the Center for Disease Control and Prevention.

Although Duval experienced a concussion earlier this season, she said that it was an injury that couldn’t be prevented. Despite having people on staff to react to the injury, as long as someone is playing a sport, there is always a risk of getting hurt, according to Duval.

Makayla Hopkins can be reached at [email protected] or @_MakaylaHopkins on Twitter.