Students navigate being Latinx and LGBTQ 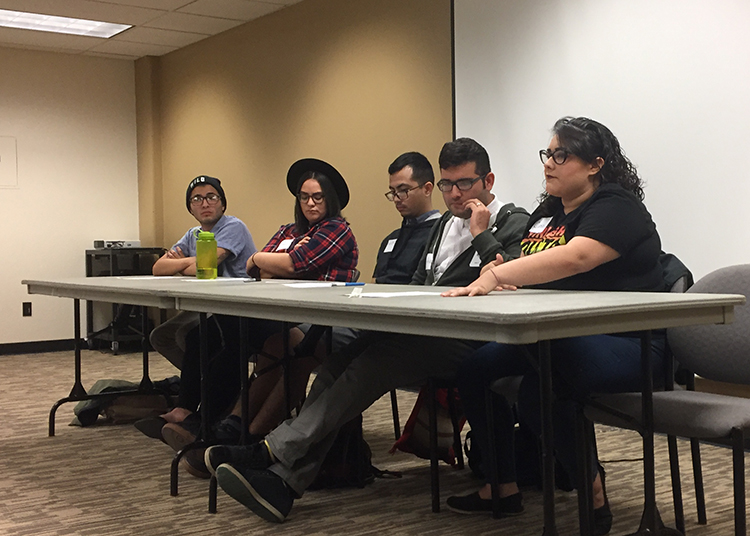 “It was something that was known, but never spoken about,” until the Gender and Sexuality Equity Center and the Chicano Latino Council led to a panel of Chico State students speaking about navigating the intersections of LGBTQ identities and being Latinx as a part of Queer Week.

Cass Hernandez, a third-year criminal justice and multicultural studies major identifying as bisexual, said growing up in a Latinx household affected her perception of gender and sexuality by keeping it something that was known but never talked about.

Raised a Jehovah’s Witness, Hernandez said she never encountered anything related to sexuality and only started learning about her sexuality in her early teenage years.

Aldo Cruz, an anthropology major who identifies as gay, had similar experiences growing up in Mexico.

“Our culture is very gender-binary, unfortunately, which can be great but also can be very toxic and can also promote unsafe environments,” he said.

High school was a difficult time to come to terms with his sexuality because of fear of rejection, especially by his parents, Cruz said.

“There was a point when I was like ‘Wow! I’m 18 and I still haven’t come out’ and remember thinking ‘Wow! They’re really happy with me, but how much is this going to change that?’

They still love me either way but it was that fear of I don’t want to be disowned if they end up not wanting me.”

Rachel Biccum, women’s program coordinator at GSEC and psychology major identifying as bisexual, said she watched women in her family struggle pioneering being queer, which made it easier for her to learn and understand the concept.

“I had to watch them struggle and tell the abuelos and saw just the tragedy that ensued lots of tears because of the what about the son-in-law and all that stuff,” she said. “It was kind of hard to watch all that because I thought what is going to happen when I have to tell them?”

“It’s been about a year since I came out to my mom, and being honest, I wish we would hear stories about the ones that didn’t work,” Hernandez said. “If someone had told me ‘hey it didn’t work out for me,’ I wouldn’t feel as alone.”

Only her mother, sister and cousin know she is bisexual.

“I didn’t want to be afraid anymore like I was at home,” Hernandez said. “My mom yelled at me over the phone and when we were in person she yelled at me again, hit me a couple of times and told me not to have a girlfriend.”

Hernandez said she found it difficult to understand that it was okay to be bisexual even though her mother disapproved and has not told the rest of her family about her sexuality because of fear.

“I live in fear with my family because that’s not what we do, that’s not okay for my family, it’s never okay,” she said.

Cruz experienced homosexuality as a family issue when he brought his first boyfriend to a birthday party. The standards for homosexual men were belittling, he said.

“It was like you are still a guy, but don’t hold your boyfriend’s hand. Don’t hug your boyfriend. If you’re hugging him for more than second, it’s already too much. Don’t corrupt our children by showing your affection in front of them,” Cruz said. “They were belittling my relationship as something that’s not okay and that’s dirty. It was not only disrespectful to me, but it was also very disrespectful to my partner.”

Seve Christian, the transgender program coordinator at GSEC, identifies as queer, non-binary and uses they/them pronouns. They came out their freshman year of high school as bisexual before they learned about queer theory, which later made it difficult for their mother to understand, he said.

“My mom was confused by the idea that it could be so fluid. That I could do whatever I wanted to,” they said. “For so long she viewed it as something polarized, you’re either gay or you’re not.

“When I first came out, she told me ‘I really want you to think about how big of a decision this is.”

Finding a middle ground between her Latinx identity and sexuality is difficult, Biccum said.

Biccum said she feels at a distance from her communities because she is invisible due to her appearance when it comes to looking Latinx and LGBTQ.

“I have a lot of privilege in terms of people seeing me down the street not necessarily seeing me as queer or Latinx, but it also creates a lot of distance between me and my communities and it’s really sad,” she said. “And if I want to reach out to one of my communities it feels like I have to hide another part of myself.”

“Navigating Latinx spaces has always been hard for me,” they said. “It didn’t start happening noticeably until I moved to this area and I was made hyper-aware of my race. It’s just hard trying to figure out what parts of you, you can display in certain spaces and which ones you can’t.”

Cruz said he struggles to balance his undocumented student identity, Latinx identity and being queer.

Biccum said her family still holds an expectation that she is still going to be straight because of her bisexuality.

“Coming out as a bisexual in my family it was like ‘OK she can still be straight. Thank god she’s not a lesbian,” she said. “Even after I came out, they would ask me ‘did you get a boyfriend?’”

Hernandez agreed, she said in her family there is still an expectation that she will find a man.

“For my family that still doesn’t know, their expectation is that I’m going to graduate, find a man, get married and have kids because growing up that was the Latina view,” she said. “You’re going to grow up, find a man, serve your man, have your kids, but still have a career. That was their way of showing that they made it.”

Hernandez said she is not longer hiding her sexuality and is a proud Chicana and queer.

“Our identities make us who we are,” she said. “Nothing is invisible for me now.”

Bianca Quilantan can be reached at [email protected] or @biancaquilan on Twitter.