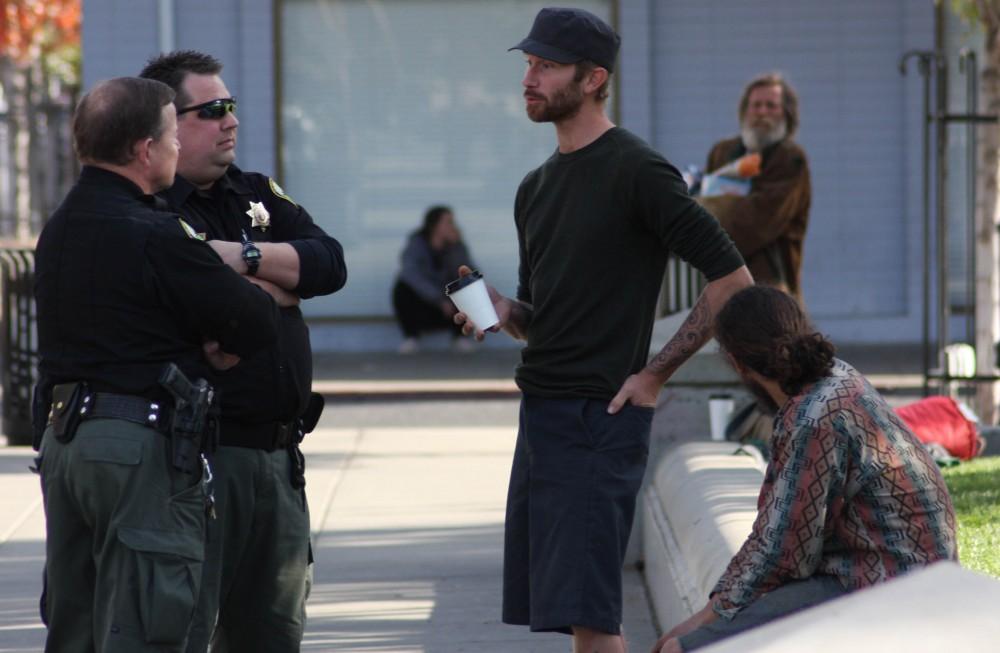 By Shelby Keck Security guards A. Carpenter and B. Stevens talk with Ryan Laine Wednesday, Nov. 6, in the City Plaza the day after the Chico City Council approved the sit-and-lie ordinance.Photo credit: Shelby Keck.

A controversial law that will allow the police to issue citations to individuals occupying public sidewalks was approved by the City Council on Tuesday night.

The sit-lie ordinance would prohibit people from sitting or lying on Chico sidewalks that are adjacent to commercial property between the hours of 7 a.m. and 11 p.m.The ordinance is expected to come back to the council on Nov. 19 for a second reading and adoption and would take effect 30 days later.

Individuals who are cited would be fined $100, $200 and $300 for the first, second and subsequent violations in a one-year period. The ordinance has a sunset date of Jan. 1, 2016, and includes exceptions for emergencies, people using wheelchairs or walkers, public benches, bus stops, outdoor cafes and children in strollers.

The council chambers was filled to over its capacity as passionate advocates on both sides of the issue lined up to be heard. A majority of the public comments were against the ordinance.

The city is going about this the wrong way, said Jennifer Stava, a self-identified homeless woman.

“Unfortunately, the city does not know our stories,” Stava said. “Instead of fighting the homeless … the city should work with us.”

The problem of homelessness cannot be solved by tolerating it or throwing tax dollars at it, said Sue Hubbard, a Chico resident.

“It is time to take our streets back from those who insist they have the right to upset the general public with their overly delinquent lifestyles,” Hubbard said.

A sit-lie ordinance previously came before the City Council in August and was rejected. Two of the council members who voted no at that time changed their position on Tuesday, one of whom was Mary Goloff.

“As a community we need to allow ourselves to move forward even if we don’t have something that is perfectly constructed,” Goloff said. “We are paying right now as a community by not dealing with this issue.

Council members Randall Stone and Tami Ritter cast the two dissenting votes. The law is not effective in the other cities where it has been implemented and will drive homeless people into other areas of the city, Ritter said.

“If we create a sit-lie ordinance, where are people going?” Ritter said. “We are pushing them out of the downtown and into the neighborhoods surrounding downtown.”

In addition to the implementation of sit-lie, Mayor Scott Gruendl is organizing an ad hoc committee to work with local service providers to workshop other solutions that came out of the Oct. 22 study session.