Can Beyoncé save country music? 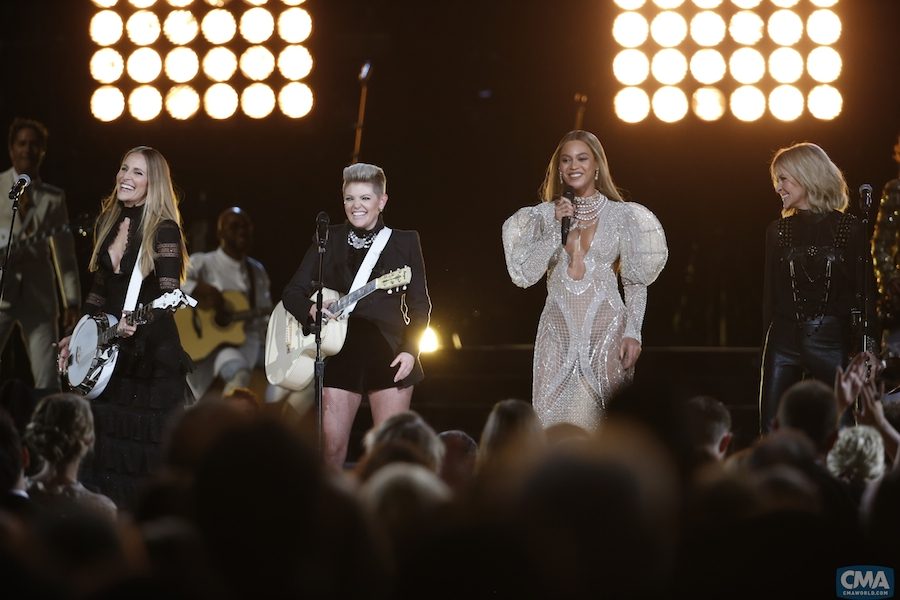 Beyoncé and The Dixie Chicks perform "Daddy Lessons" and "Long Time Gone" at “The 50th Annual CMA Awards,” live Wednesday, Nov. 2 at Bridgestone Arena in Nashville and broadcast on the ABC Television Network. Photo courtesy of the CMA press cite.

Wednesday night, the Country Music Association brought the stars out to celebrate this year of country music achievements at the 50th annual CMA Awards.

To commemorate a half-decade of music, the CMAs paid homage to country legends and current artists while looking to the future throughout the telecast.

Capitalizing on the magnitude of the show’s anniversary, CMA producers recruited the most identifiable name in modern pop culture: Beyoncé. Teaming up with the Dixie Chicks, Queen Bey performed her country tune “Daddy Lessons” off her polarizing album, Lemonade.

While many found the performance to be an endearing display of cross-genre appreciation, others were left perplexed as to why Beyoncé would be interjected into such a poignant moment devoted to country music’s storied history.

In short, the answer is because it’s Beyoncé. Considering the current state of country music, it’s probable that her casting was purposefully executed in an effort to breathe life into the struggling genre.

Most would concede that country music’s tradition of honest songwriting is its most charming and respected trait. With songs that relate to most everyone, the principles of country music are translated into earnest lyrics poured over indulgent melodies.

Combining these elements with the remnants of multiple genres, debate within the beloved genre serves as a stark contrast to its all-inclusive exterior.

Dating back to Shania Twain’s pop-country sound of the 1990s, country music hasn’t always been the first to promote expansion of its sound. While country radio has more than evolved from the likes of Waylon Jennings and Johnny Cash to today’s Florida Georgia Line and Luke Bryan, recent artists who opt for deepened sonic exploration tend to leave the genre all together, i.e. Taylor Swift, thus creating a lack of identity in the genre.

Like its fundamental elements, many of country music’s listeners adhere to traditional values themselves, leaving the the country industry to walk a political tightrope unbeknownst to to other genres.

Including political statements made by the Dixie Chicks in 2003 and the sultry lyrics of Little Big Town’s “Girl Crush” in 2015, country radio has been known to make attempts to conceal its own artists who might bring about unwarranted attention.

Despite these efforts, audiences have taken note of the muddled interior of country music. Coupling this with the ascendancy of multi-genre streaming and digital downloads, country music has seen a 17 percent decrease in sales from 2008 to 2014 according to Statista; a trend expected to continue for the foreseeable future.

In essence, this is why Beyoncé was an imperative piece in the 2016 CMA puzzle. Employing the megastar was a move aimed to reach a wider audience, ignite a buzz and honor country music’s influence across multiple genres.

Whether or not the trick worked the way it was intended is yet to be seen. However, one thing is abundantly clear: country music is at a pivotal fork in the road. Will it integrate outside influence and usher in a new generation of listeners, or reinvigorate its conventional roots?