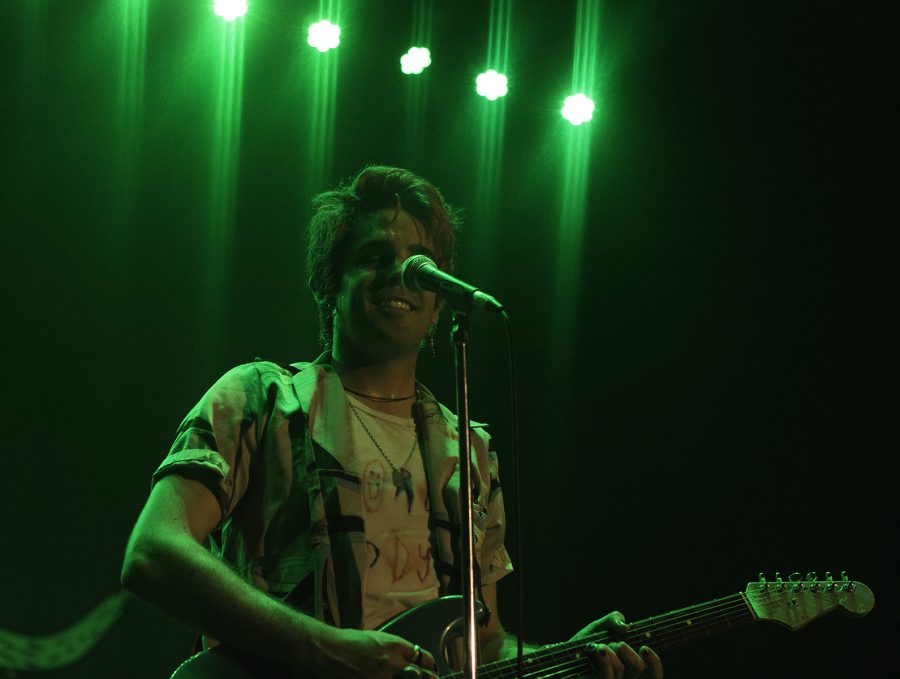 Jeff Laliberte gazes into the crowd in between songs. Photo credit: Sean Martens

When New Beat Fund Front Jeff Liliberte took the stage at The Senator Theater, you could tell that he’d stood where Kurt Cobain once stood in a booth at the legendary Sound City. It was like the ghost of the Nirvana front man inhabited his body as he danced on stage in an oversized cardigan similar to the one Cobain wears in the Smells like Teen Spirit video. However, when he sang, it was something entirely original and recognizably a product of Southern California Culture.

A couple hours before the show on Nov. 11, the band lounged around on a couch in a musty room under The Senator opening for the Dirty Heads. The Orion had a chance to catch up with them before their show to talk about their music they affectionately dub “Guac Rock.”

How’d you get the band together?

Jeff Liliberte (JL): Paul and I are brothers so we met through birth. He played bass on his umbilical cord. It was tight, so I said we should jam. I met Shelby through a shitty high school job we had.

Shelby Archer (SA): It was a solid BBQ place. We packed takeout together and I asked him to join a band but that was three bands ago. When we met Michael, he had a handlebar mustache and was wearing a robe and drinking red wine.

What’s the story about your name?

Paul Liliberte (PL): This producer that we worked with, Matt Wallace, had a jar that had “new boat fund” on it. We changed the “o” to an “e” and it became an ongoing joke. We put picks and change and paperclips in it. Michael tried to put a gummy worm in there too. And then we had this three-man water balloon launcher. We’d put various fruits and vegetables and water balloons into it and launch them over the railroad tracks at cars for fun. And on the last day (of working at Sound City) we launched it into a corporate building and ever since then we went with the name. It was tight.

JL: When it happened it actually happened in slow motion and Faith No More’s “Epic” played.

What would you say is your biggest musical influence?

JL: We grew up in skateboarding in Southern California so we listened to punk rock and gangster rap, which were happening at the same time. If you skate you listen to certain types of music so we were listening to stuff like Operation Ivy, Pennywise, Blink 182, as well as Biggie and Tupac. And then finding bands like (Red Hot) Chili Peppers, who was kind of directly in the middle of this hard rap style and So Cal punk thing that was going on at the time. Those early influences impact the rest of your life, whether you know it or not. Like that’s the shit that you subconsciously fucking fell in love with. I would say it started there.

SA: Now a days it’s fucking everything. We will listen to anything and probably take something good away from it.

What about modern artists?

JL: We like Chester Watson. And this other guy, Amine, he’s only got like two songs out right now but he has this one called Caroline and it’s my favorite song right now.

How would you guys describe your sound?

JL: We call it G Punk Beach Funk. Which is sort of like what I was saying before about So Cal skater music. We get called Guac Rock too.

Tell me about “Sponge Fingerz.”

MJ: It was written all over Southern California. We kinda shacked up in these cabins in Topanga Canyon and didn’t leave ever except for coffee. We just drank and smoked a shitload and wrote a bunch which became “Sponge Fingerz.” We tracked a bunch of songs in Topanga and finished it up at Sound City. It kind of embodies our lives in Southern California in the LA area. You can kind of hear that vibe in all the different songs. It’s our first full length record, it’s two years old now but after we finish this tour we’re getting back in the studio to record some new songs to release soon.

SA: Here’s what to say about Sponge Fingerz- that shit’s old news; new music is coming! 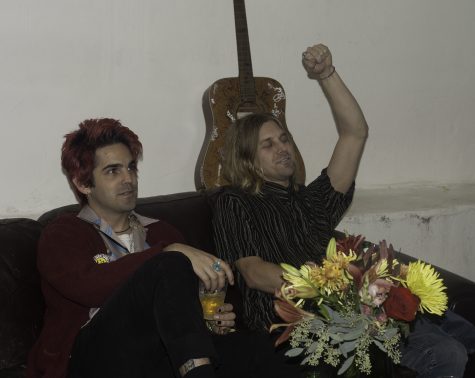 MJ: We’ve been working out of there a long time. We had our recording spaces there, our rehearsal spaces there.

PL: We used the actual console that Dave Grohl took.

JL: We were like the last band to record there before they went under. I got to record in the recording booth where Kirk (Cobain) recorded “Nevermind.”

MJ: There’s just a shit load of history there.

What do you guys love the most about playing live?

MJ: It’s the energy shared between the band and the crowd; we can play an amazing show on our own but if the energy isn’t there from the crowd it’s kind of a bummer.

PL: The highest highs I’ve ever reached are after really, really high energy shows or after writing something really cool in the studio. And molly.

Why do you do music?

PL: Definitely not for money.

MJ: For me, growing up listening to music was just one of the most influential things in my life, so I kinda just wanted to do that. Once I started playing music I’ve never really done anything else.

SA: People in general have a hard time finding something they want to do. I know for a fact that even before we all found each other, (music) was it for us. It’s just second nature, it’s who we are. It’s hard to say why, it just is.

MJ: I have no idea what life is without playing music. I don’t know what I’d do if I wasn’t in the music business.

What do you want people to get from your music?

PL: A sense of open mindedness, good vibes, something positive. A way to escape the negativity of their lives.

JL: I heard this Jim Carry quote recently that went something like “I have the ability to free people of concern.” I think we’re in a similar lane. When people come to our shows they can forget their problems and just have fun and not give a fuck.

SA: I want to inspire people to come together. Like if a couple’s song is one of our songs or maybe they met at our show that’s what I like about music. Hopefully, we inspire nostalgia.

PL: Like if we could have that song that plays in the background of a melodramatic high school movie right as the main characters kiss that would be really cool. We want to give people the feels! All the feels!

PL: Our van breaks down. So we all went down and drank in a cemetery before going back to the van. They just started figuring out the van situation. This guy offered to give us a ride to our next show.

MJ: This guy has hardly any teeth and is drunk and he’s like “Hey I can hitch up your trailer with all your gear to my truck and take you to Omaha.” So seven of us pile into the cab of the pickup truck and he lights up a meth pipe and is like “Okay are you ready to go?” We got to Omaha and we gave him a pass to the show. He ended up getting blackout drunk and smoking more meth. But people did tell us it was their favorite show of the tour so it was all worth it.

Anna Porretta can be reached at [email protected] or @theorion_arts on Twitter.