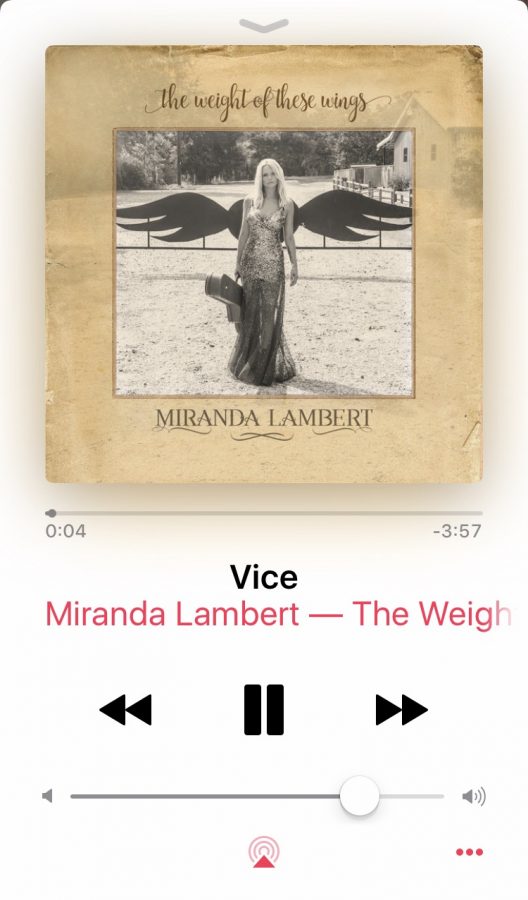 "Vice" Lambert's lead single from The Weight of These Wings as shown on Apple Music.

Despite getting her start on a reality show, Miranda Lambert has had the good fortune of serving as the primary captain of her career.

Although this has led the country songstress to superstardom by way of candid songwriting and an emphatic delivery, the driver’s seat isn’t the easiest place to be when the road leads to a tumultuous and desolate leg of the journey.

Lambert’s split from fellow country star Blake Shelton surprised fans and critics alike. The formerly outspoken Lambert nestled up to silence as she opted for restrained commentary leading up to the release of her sixth studio album, The Weight of these Wings.

Contrary to the matter-of-fact exterior Lambert has transmitted throughout the years, Wings relies on a raw and vulnerable sound, offering its listeners a direct line into Lambert’s most intimate thoughts.

From the get-go, the 24 tracks arranged in a double album format stand in stark contrast to mainstream records today. Combining this with the subtitles of the two discs, “The Nerve” and “The Heart,” listeners are subconsciously reminded to brace for impact prior to pressing play.

Laced with pulse-like backbeats and hypnotic reverb, Lambert’s vocals are vulnerable on the opening of “Runnin’ Just in Case,” which remain as steadfast elements throughout the duration of the record.

While the stripped transmission of Lambert’s well-placed wit is peppered throughout each track, Lambert offers an array of quirky and hypnotic melodies within the first disc in the project’s more upbeat tunes. From the not-so-sober thoughts of bar residency in “Ugly Lights” to the vote of confidence provided by 99-cent shades in “Pink Sunglasses,” Lambert explores the initial stages of heartbreak recovery with a rebellious tinge.

Sufficing as a purposeful and poignant transition, “Use My Heart” cues listeners into the transition from “The Nerve” to “The Heart” as Lambert croons, “I don’t have the nerve to use my heart.”

From here, Lambert indulges in various songs exploring self-reflection and poetic exposure of her personal tribulations and triumphs. Lambert gives in to direct acknowledgment of agonizing heartbreak on “Tin Man” while singing “You ain’t missing nothing/’Cause love is so damn hard/Take it from me, darling/You don’t want a heart.”

Citing romantic rebound, Lambert projects caution to a future flame on “Well-Rested,” taking a predictive note of a fresh love interest on “Bad Boy” and finds solace in her extensive character on “For the Birds.”

Resolute and resonate, Wings never dwells in sorrow, but rather offers insight into a journey of healing by freeing Lambert’s wings of the weight that has burdened them. Taking flight, Lambert’s Wings is sure to be long celebrated as country’s premiere release of 2016.