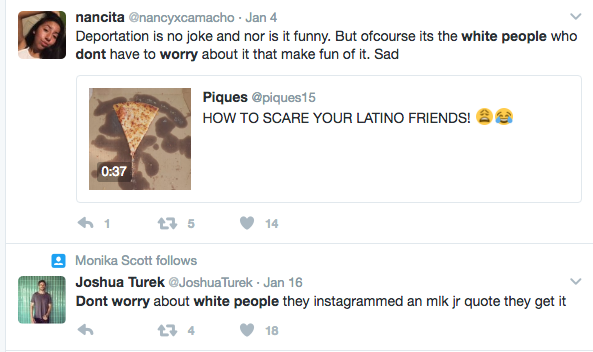 Many people attending Chico State still felt powerful shockwaves from the recent presidential election. With an uncertain future for many of us, it was comforting to come together as a community at the Election Expressions event.

During this time of political disbelief for minorities across the nation, I have felt an array of emotions. However, recently it appeared my feelings didn’t matter because on the outside, I am white.

Peers, family members and even my closest friends tell me, “Why the hell are you worrying? You’re white!”

Partially they’re right. Despite my Mexican-American descent, my skin color is as white as it gets. And because of this, I have received a certain kind of privilege throughout my life, especially now.

Participants shared their personal experiences and horrific realities. They expressed their feelings on stage through poetry, spoken word, storytelling and venting. They covered topics about discrimination and deportation, as well as abortion and self-love.

Throughout this chaotic political journey, I did my part as a young adult by voting in the preliminary ballots. I also did my part in choosing to vote for the lesser of the two evils. That is still not enough, I now realize.

Just because I’m not considered a minority in danger doesn’t mean I can’t help. Now more than ever, my skin color can really matter. I can use it not to oppress others but to stand up for those who can’t stand up for themselves.

Junior Brina Cobarrubias was in charge of this event along with Cross-Cultural Leadership Center. Cobarrubias said she had created the event to offer the Chico community a chance to come together.

“This event was just a little lightbulb that went off in my head the day after Trump was elected,” Cobarrubias said.

This event was neither anti-Trump or pro-Trump. It was just a time to release any and all emotions spurred from the recent election.

The response from the community helped me understand our battle is not over. Although the wrong person won, we will continue fighting against discrimination and sexism.

I feel the anti-white sentiment people are expressing comes from a place of fear. I may not be a target because my skin is white, however I intend to stand up for those who are being knocked down.

ppear white. We should focus on activism and help each other through the next four years.