Batter up: Baseball is back! 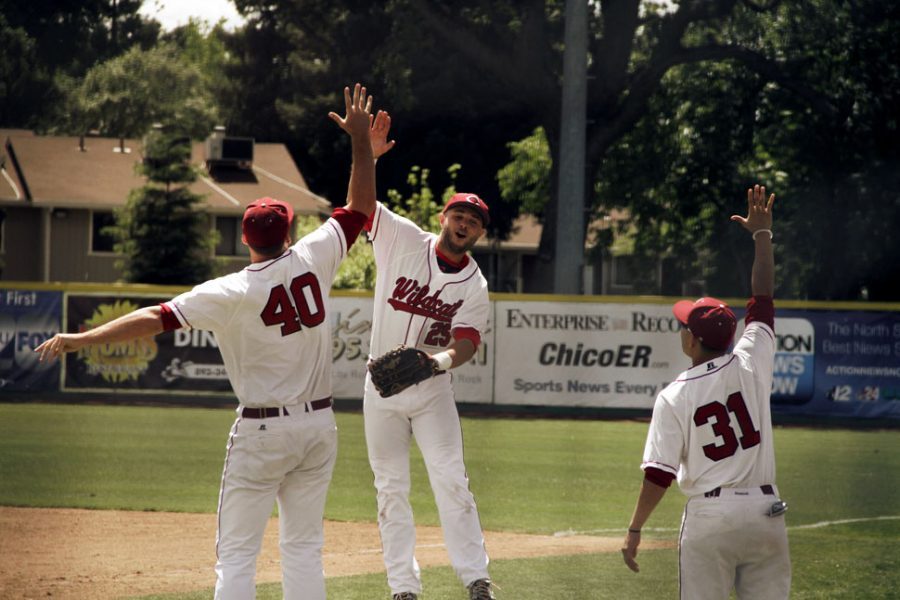 Cody Snider high fives a teammate after a big play

After a 7-5 win against the Point Loma Sea Lions, it’s safe to say that Wildcat baseball season has begun, and the team is ready for action.

The ‘Cats is set to win its second California Collegiate Athletic Association title this season. After ranking 37 in the nation, the ‘Cats exceeded last year’s expectations by making it to NCAA Championship Tournament West Regional.

The loss against California Baptist eliminated them from the regional last year, but the ‘Cats are more determined than ever to make this season one to remember.

“We’ve all set our expectations very high. We believe in each other and in the direction we’re headed,” said Nick Padilla, returning infielder. “It is still early, but we think we can push towards that national championship.”“We’ve brought back seven starters from last season, and we also have a deeper pitching rotation,” said Stuart Bradley, fourth-year Chico State student. “We weren’t quite sure what to expect last season, but this year we know what it takes to get to regionals and farther.”With 19 new players, there were a lot of adjustments needed in order to give everyone a chance to play. But “the new guys have adjusted well with their transition into the team,” said Andy Bursch, first-base coach. “These guys have a lot of motivation because they still have those two losses in the Regionals last year, and they want to get back there and do a lot better this year.”With 35 games to showcase what they’re learned from last season, the ‘Cats are motivated and ready to show us all how amazing the team can be.The team is lucky to have 17 returners this season, including pitcher Clayton Gelfand and infielder Sonny Cortez, who are First Team All-West Region and All-CCAA selections, as well as the 2017 National Collegiate Baseball Writers Association preseason All-West selections. CCAA Tournament MVP Dillon Kelley as well as Second Team All-CCAA infielder Cameron Santos, also have returned to the team this season.With a talent-filled roster and vigorous work ethic, there is no doubt that the Chico State baseball team is going to achieve tremendous things this season. “We have a long road ahead,” said Hunter Haworth, pitcher. “But as the year goes on the team will gain the confidence we need.”

Come out and support the Wildcat baseball team Feb. 11 at noon, as they take on Simpson University at their first home game this season.

Natalia Marcus can be reached at [email protected] or @theorion_sports on Twitter.