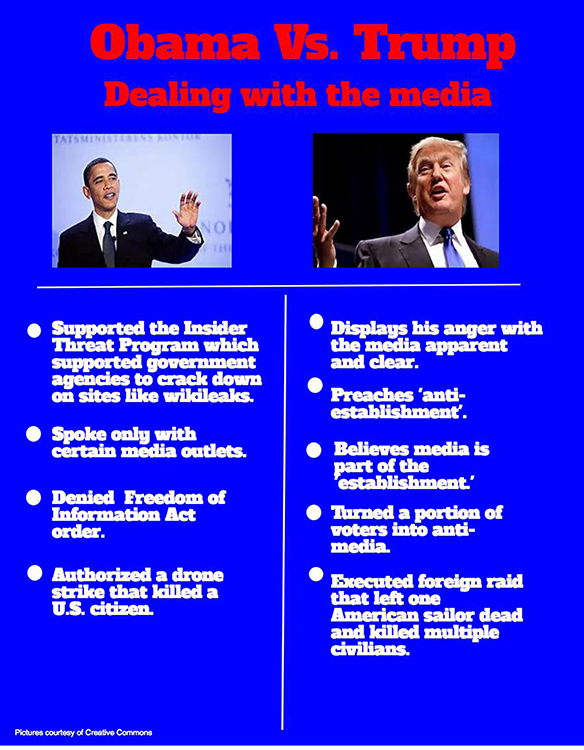 History seems to be forgotten rather quickly when it comes to American politics.

When it comes to Barack Obama, America may have the fastest onset of short term memory loss. Obama may not have publicly waged a war on the media, such as our new president, but he avoided, criticized and tried to persecute those who stood in his way.

Trump is nothing entirely new, his disdain for the media is just louder and more public than his predecessors. But the message is the same: back off and don’t get in my way.

Obama manipulated the media to his advantage just as Trump does. They just executed their strategies in different ways.

Obama avoided the hardball questions, only talking to certain media outlets, limiting accessibility and not answering Freedom of Information Act requests, according to a PBS article.

The article by PBS states, “The U.S. spent a record $434 million trying to keep up. It also spent about $28 million on lawyers’ fees to keep records secret.”

Obama often stated that his administration is the most transparent in history. Obama’s only defense was his statement that every visitor at the White House was documented.

Obama’s silent tactics kept his media disapproval hidden, while Trump is more forward about his anger.

Obama waged his own war on the media through the guise of leaks. He supported an initiative known as the “Insider Threat Program” which supported government agencies cracking down and persecuting those who leak information to WikiLeaks or reporters.

Much like Trump, during a stop in Senegal, Obama insulted the American media for asking 4-in-1 questions and then apologized for them to host President Macky Sall. A Washington Post article rightfully called Obama out for this move.

The message Obama sent was clear, he wanted reporters to back off him and for understandable reasons. No one wants their mistakes and errors front page news, whether it be a normal citizen or an elected official. However, it’s the job of the media and the public to call out elected officials for their errors and lies, whether we voted for them or not.

We pay them with our tax dollars and keep them in office with our votes. It is their obligation to speak to the media by answering questions about a foreign raid gone awry, or why drone strikes kill Americans and civilians. And it is the job of reporters to hold public officials accountable to the American people.

Without a free press, a democracy could easily slip into a restrained regime of propaganda spit out by elected fascists under buzzwords like “national security.”

When a presidency threatens his administration to “get out” if they don’t agree and support him that’s a problem. And without reporters, the public would have no insight into the president. Perhaps this is what Americans want, since his supporters have not come out against him for attacking those who disagree with him, even people in his own administration.

But, Trump knew any coverage was better than no coverage as he already backed away from many claims he made on the campaign trail, especially on his “draining the swamp” rhetoric. He told supporters at one of his thank you tour rallies that he didn’t even like the expression, but he said it and the crowd loved it.

Trump preached that he was anti-establishment and convinced people that the media was part of the establishment. He turned voters into anti-media which propelled his rise and popularity every time the news framed Trump in a negative way. The American voters apparently did not care for minuscule details about Trump’s life, word usage or beliefs. They voted for their bank accounts and the media only cemented their votes more every day.

Many Americans categorize the media as being “part of the establishment” which Trump repeated throughout his campaign.

There is no disputing that Trump possesses a vehement dislike for the media but without them he never would have been elected. His message of “draining the swamp,” borders and bringing jobs back never would reached the American people without news outlets commenting on his every word. The media painted his theories for a better America as disgraceful, and yet those things that Trump preached were actually what the American people wanted.

The media should have swarmed on the DNC and Clinton like they did on Trump to call them out for the scandal that derailed Bernie Sanders from the election. And the media also should have treated Sanders like a real, potential candidate for the American people.

But now more than ever, reporters should learn from history to never go soft on a president, even one with high approval ratings like Obama. Journalists need to treat each candidate fairly and give each one equal air time.

Without the patrol of the media, the possibility of the American public getting another populist candidate voted into the White House is high.

Susan Whaley can be reached at [email protected] or @theorion_news on Twitter.