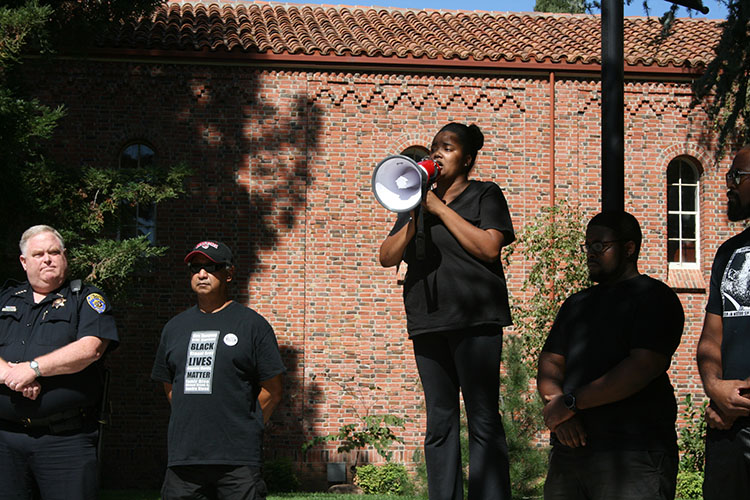 Egypt Howard is using her past experiences to help better the lives of her local African-American community.

Former Chico State student, Egypt Howard remembers a lack of empathy in the Chico community and a lack of people putting time and effort into empowering black students on campus. While attending Chico State, she was one of the few students who put time and energy into activism and empowering others.

Howard is now the assistant program manager at the Cross Cultural Leadership Center. Through her work, she coordinated multiple activist movements on campus including two Black Lives Matter movements and the National Boycott day in September.

Growing up in a single-parent household in Sacramento, she remembers college as the more normal part of her life. At a young age, Howard sat in the back of a community college classroom with her mother who was raising her and her two brothers, while also trying to complete a degree. After her mother graduated college, the recession hit and her she lost her job. Howard said her mother’s experience influenced her decision to go to college.

“After watching my mom go through that, it impacted me,” she said. “I felt like I took steps back and felt hopeless because my mom overcame obstacles, figured it out with three kids, went to college, got the job and for everything to hit and lose everything. It isn’t worth it.”

“It was a point in time where I felt college wasn’t worth it or my time and I had to overcome that in my personal reflections of where I wanted to go or wanted to do and not letting my journey be defined by others failures or successes,” she said.

Howard received an early acceptance to Chico State in 2009 and majored in multicultural gender studies with a minor in African-American studies. It wasn’t until her second year that she came across the CCLC, where she received a position to coordinate a retreat that hadn’t been managed for a long time.

“I spent a lot of time as a student, programming and coordinating retreats. Overall I was an engaged towards activism and racism, where my heart is,” she said.

Howard finished her last semester of college working with a nonprofit organization based in Sacramento, Alliance for Education Solutions[J1], an organization focused on youth voices and youth advocacy.

“When I graduated, they asked me to coordinate the program,” Howard said. “I was pregnant with my daughter and just graduated college so I was figuring everything out. That’s when Chico State took on a program called Pipeline[J2] that I applied for and received the position.”

Pipeline[J3] looks for leaders from the area to be mentors and provides opportunities for everyone to share with one another and support one another. As a staff member, Howard said her experience is different and she sometimes finds it difficult. Inspiring students is what drives her.

“When it comes to my work in the African-American community, I want to work with a group of students that feel inspired and believe in themselves to participate in programs or other events necessary for the community,” Howard said. “There has been a lot of apathy within our community and not enough movements or leadership, so I’m hoping that through Black History Month and mentor programs that students can get re-inspired and reignited to go out and ask for change, create change and make movements.”

Howard said she fights for many issues, but she is pulled towards black rights because it directly affects her.

One racial incident Howard experienced was when a professor asked her why black people didn’t know how to swim. Another incident was when students would do group projects she would be the last to be chosen into a group or asked. But these experiences, Howard said, are what make her stronger and more motivated towards activism.

“I love my work. I enjoy the side things that I get to do within the community,” she said. “I identify as a black woman and so it directly impacts a lot of the people I’m surrounded by. My daughter is a black young girl. My partner is a black male, so my life is very much surrounded around the impact of America and black people, therefore I do a lot of extra work in that because I care so much about it.”

Karen Limones can be reached at [email protected] or @theorion_news on Twitter.