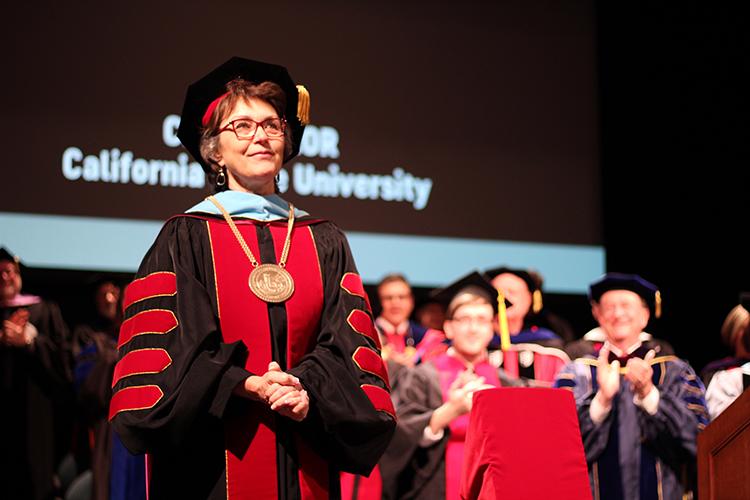 The future of Chico State looks prosperous under Gayle Hutchinson’s presidency as she addresses issues on campus such as the party culture, reinventing the health center and possibly building an open-late eatery on campus.

Here is a review of the new President’s accomplishments and upcoming goals and how they will affect students.

When Hutchinson was elected July 1, 2016, as the first female president at Chico State she began a “100 Days of Listening” tour. With the conclusion of her first 100 days as president, she has created a personalized report of her observations and comments to responses she received.

In the 36 page report, she states she had 90 group meetings, an online survey and two open forums with students, staff, faculty and friends.

These “listening” tours and events did not seem to be advertised to the average student during the period that they were being held. Only 15 responses out of the 407 on the online survey are from students. Although it could be argued that students don’t care about campus engagement, awareness of these events would have easily increased student interaction.

However, she is hoping to install programs that may help the issue of students not being aware of events going on in the campus community.

“We will improve communication between faculty and student support programs to promote awareness of assistance available to students,” the report states.

A common theme that is reiterated across Hutchinson’s report is still the challenge of facing the “party school image.”

This stigma has stuck with Chico state since the ’80s and at this point, it is only beating a dead horse. Former president Paul Zingg seemed to have a few final words about the reputation and why we should put it to rest in an interview he did with Chico News and Review in April of 2016.

“For Chico to have had this reputation of being an out-of-control party culture, that was an exaggeration,” he stated. “To consider Pioneer Days the defining event in Chico’s story … I mean, you’ve got to be kidding. It’s been 30 years. We are making progress, but where we started was never as bad as some folks wanted to believe.”

Continuing to emphasize this problem creates more buzz around the issue than necessary. Yes, a large portion of students drink in excess. But it is not the Universities complete responsibility to babysit these students.

Fortunately, one of the tactics Hutchinson wants to use to address the party image issue is a unique, yet innovative approach.

“Overcoming our negative reputation as a party school,” she stated. “Ensuring that mental health services are available to students.”

This would most likely allot additional funding for this facility to allow for increased faculty. However, it would be highly beneficial for meeting students needs of mental health care.

Students often cling to unhealthy outlets when in distress, and having the ability to talk to someone or vent to a professional can help them. When students feel like they are more in control of their life, they may be less likely to participate in destructive behavior, according to Psychology Today.

The City of Chico placed new cameras on the bike path behind Yolo Hall this past semester. Chief John Feeny is also in the process of creating something called Wildcat watch, a collaboration between Associated Students, Student Affairs and the University Police Department.

The group will be trained in bystander intervention, in order to prevent crimes as they occur. The goal is to promote a safer campus through people being more vigilant.

For the students who enjoy a smoke every once in awhile, cigarettes may soon be banned from campus. This is an effort by The Office of Chancellor and is to be carried out by the campus officials.

The penalty for smoking tobacco on campus will possibly result in a ticket similar to one that would result from riding a bike on campus. This is to promote a cleaner environment on the Chico State campus.

Hutchinson said that she wants to create a kitchen and eatery on campus that will be open from 7 a.m. to midnight. She also stated that she hopes to develop a new program to help students who struggle with affording groceries.

Hutchinson has accomplished a substantial amount in her short time as president, but feedback from students is going to be crucial to her success in terms of changing so many “traditions” on campus. Along with feedback on the policies, students also need to show support for the programs, by taking advantage of them.

Nicole Henson can be reached at [email protected] or @Theorion_News on Twitter.