Getting real about Islam 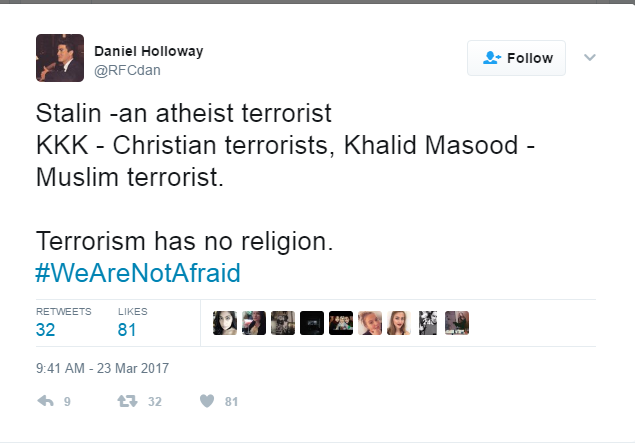 One of the many tweets that create ignorant false equivalences. Photo credit: Roberto Fonseca

It’s the same story every time there is a terrorist attack: a hashtag goes out in solidarity with the victims, people change their profile pictures on Facebook or Twitter to the flag of the victimized country. And then refuse to talk about the real problem at hand. Islam.

Khalid Masood, 52, was the perpetrator of the attacks in London that killed five and injured 40. He converted to Islam and pledged allegiance to ISIS, which has since claimed responsibility for the attack. Masood has a reported violent history with the British police.

Apologists for Islam like Shaun King, Reza Aslan and Cenk Uygur are prime examples of people who will create false equivalences between Christianity and Islam to suppress debate.

Both Aslan and Uygur will constantly attack Sam Harris, an open critic of Islam, as a bigot and as dangerous. Both statements are untrue about his work.

Liberals love to boast about how they are tolerant of all people, but forget that fundamentalist Islam is the most intolerant of religions. Charlie Hebdo is an example of how dangerous it is for people to even satirize the religion.

Eight members of the magazine were slaughtered by radical Islamists. This is a religion that isn’t afraid to kill people for speaking out against their beliefs.

ISIS is Islam, a radical version of it, but it is still Islam nonetheless. The refusal to acknowledge the connection of the two is the main reason why there are so many terrorist attacks around the world today.

ISIS will quote Quranic texts in their propaganda videos to justify their actions, but those on the left will continue to make excuses for them.

“They’re not interpreting it the right way,” and “they’re taking the book out of context” are usually the arguments made against this, but are moot points.

The founder of ISIS, Abu Bakr Al-Baghdadi, has a Ph.D. from the University of Baghdad with a focus on Islamic culture, history, Sharia and jurisprudence. He is not misinformed about the religion of Islam, he is interpreting the Quranic text as it would have been interpreted 1,400 years ago.

Muslim-majority countries like Iran, Iraq, Syria, Saudi Arabia and Afghanistan are all theocratic countries. Beliefs such as the killing of apostates and homosexuals are laws in these countries.

Ex-Muslims like Ayaan Hirsi Ali, Maajid Nawaz and Sarah Haider have been saying this for years. Hirsi Ali, for example, is a Somali refugee who was genitally mutilated at a young age and was nearly forced into an arranged marriage. She escaped to the Netherlands in search of political asylum.

Hirsi Ali is in constant need of bodyguards because of her views on Islam. This is the type of person liberals need to protect, but won’t because any defense of her will be deemed as racist or Islamophobic.

The refugee crisis in Europe hasn’t helped ease the tensions between Western and Islamic countries in any way.

The European Union decided to take in migrants from North Africa and Turkey, causing a severe culture clash. Sweden has become a hotbed for crime and has even declared “no-go” zones to prevent Swedish people from being assaulted by immigrants. Crimes in Germany have skyrocketed since their influx of migrants.

Taking men from cultures where women are viewed as property and integrating them into a Western culture where women can dress and do as they please, only hurts the inhabitants of those countries.

This isn’t only a western problem. Muslims are the biggest victims of Islamist attacks.

There have been Islamist terrorist attacks in Bangladesh, Cameroon, Indonesia, Nigeria, Mali, France, the U.S. and Belgium.

Criticizing Islam will not radicalize Muslims.

People need to stop being so politically correct and call out bad ideas. Conversations need to be had in order to create a better world. Stop being afraid of being labeled as a racist or an Islamophobe. The future of the world is at stake if no one able to criticize bad ideas.