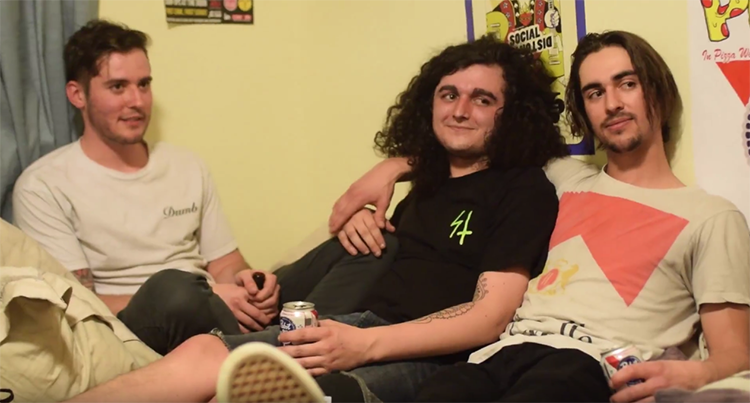 The couch is in the kitchen. A couch wouldn’t make sense in Jac Derner’s living room, it would just get in the way of the mosh pit.

The only permanent furniture in the living room is a drum set, some amps and some microphone stands.

Sunny Acres is an eccentric music trio based in Chico consisting of Derner (bass), Manuel Lopes (drums) and Mike Justice (guitarist and vocalist). The band is a relatively easygoing group of guys when off stage but their demeanor changes once they pick up their instruments and play.

As that project came to an end, the two put an ad on Craigslist seeking a new jam companion who was “cooler than the bottom of an ice chest.” Lopes, who moved to Chico last year, hadn’t played music for a while. Seeking musical comradery, Lopes found their ad and Sunny Acres was born.

Although the band has only been around for a year it has managed to develop a loyal following. They frequently play at local venues, yet they are also renowned for their house shows.

“As much as we love supporting locals venues, we open our house to bands looking for a place to play,” Derner said. “We try to make these little DIY shows as legit as possible with food provided by our friends at Gnarly Deli. It’s a way to show support for our community.”

Justice describes their sound as being “psychedelic space punk.” Derner said the genre belongs to them because they “called dibs.” The band draws influences from bands such as At the Drive-In, Ty Segall, Parquet Courts and, of course, Gwen Stefani.

Recently, the band has taken a break from their frequent performances around town to work on their upcoming self-titled EP. Sunny Acres plans on making strides outside of Chico and are planning a tour with dates in Sacramento, Redding and Reno.

Sunny Acres’is having an album release at Argus, in Downtown Chico, to celebrate their new EP on April 6.