Making it to first in the nation 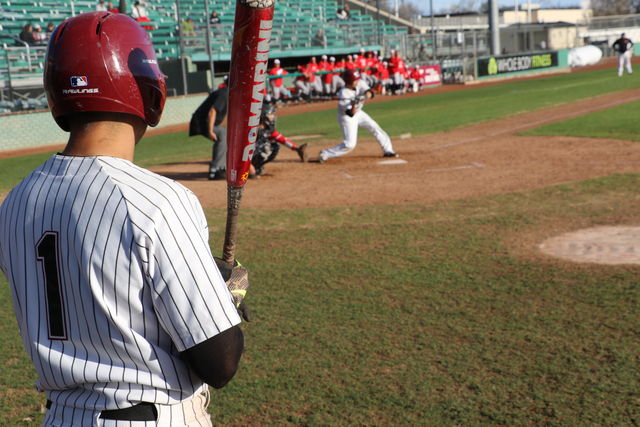 The Chico State men’s baseball team is number one in the country for Division II. With a mix of savvy veterans and key newcomers, the Wildcats are a tough team to beat. The team is currently 27-5 and has only lost one game since Feb. 24.

They used their stellar offense as well as a deep pitching rotation to put them at the top of the rankings for the first time in school history.

Chico State’s pitching rotation is the best in the California Collegiate Athletic Association. The team has a 2.41 earned run average while opposing teams have only scored a total of 81 runs throughout the entire season so far.

One of the standout pitchers on the team is junior Casey Costello, a transfer student from Orange Coast College. He holds an ERA of 1.04, and the Wildcats have only lost one out of the nine games that he pitched.

Junior pitcher Hunter Haworth is also an important member of the rotation. In his third year with the ’Cats, Haworth took over as one of the key starters. He holds an ERA of 2.75 and has also only lost one game. With 56 strikeouts so far he looks to build on this number as league play continues.

Junior relief pitcher Jae Wagner holds an ERA of .87 and regularly closes out games for the team. These key pieces, a long with a few others give the Wildcats the most formidable pitching staff in the CCAA. Offense

Chico State is second in the CCAA in batting average at .296, which is right behind Cal State East Bay’s average of .300. The Wildcats have five players who are batting over .300 on the season with two just below that mark. Junior second baseman Cameron Santos leads the team with a .373 average. He has 40 hits, 30 RBIs and 2 homers on the season.

Senior outfielder Sonny Cortez is batting .311 and leads the league in triples with three. He is also one of the fastest players in the league, as he is second in stolen bases with 17.

Fellow seniors Josh Falco and Cody Snider produce for the Wildcats as well, which makes it hard for opposing pitchers to get out of an inning without the ’Cats scoring a run. This, paired with the phenomenal pitching, is why Chico State is the top team in the country right now.

Chico State found its formula for success early in the season.

All we have to do now is keeping playing at the same level in order to make a deep run in both the CCAA and NCAA Championship Tournament.