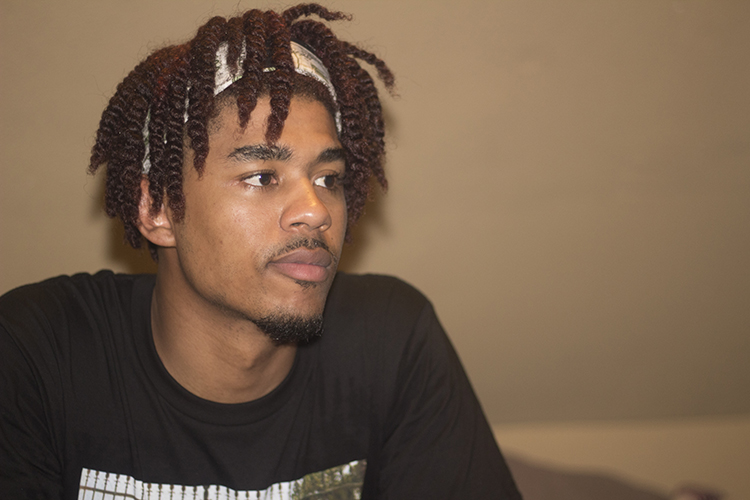 Show Banga during his interview at the after party Photo credit: Natasha Doron

For the last several years, rapper “Show Banga” has made a name for himself in the Bay Area and West coast music scene. The San Francisco native has made multiple hits and collaborated with big names like “E-40,” “Sage the Gemini” and “Iamsu!.” With three solo projects and more than 25 singles under his belt, the rapper sat down to talk about his current music projects, future plans and performing for his fans in Chico.

How did you first get introduced to the music scene and how long have you been doing music for now?

“I’ve been doing it since high school now, so for a while now.”

What style would you mostly describe your music?

“I would describe my music as original. It’s fun music that everyone can enjoy.”

Describe the process of making or writing songs in the studio.

“It all depends on what I’m working on. If I’m vibing with a producer or if I’m just writing to a beat, I usually come up with everything on the spot. Sometimes I write at home too. But it’s mostly on the spot.”

How’d you first get involved with the HBK music gang, as well as familiar with fellow Bay Area artists?

“I went to high school with ‘P-Lo,’ who’s the founder. We were in a group together and he later formed the whole HBK and ShmopLife movement.”

What message are you trying to put out for your fans?

“I just want people to have fun, be positive and know that you can come from the streets, overcome it and be something bigger.”

You’ve collaborated with other Bay Area artists like “E-40,” “Sage the Gemini,” “Iamsu!” and “Kool John.” What’s like it working with them?

“It’s dope working with your peers. Especially working with people from the bay. ‘E-40′ jumped on a song with me and I was honored because he’s a legend. ‘Lamsu!’ and ‘Sage’ are like brothers to me, so it’s all love.”

You recently put out your newest album “Showtime 2,” which pays tribute to your dad. Tell me a little bit about the inspiration behind that.

“My dad is ‘Showtime’ and he’s a well-respected entrepreneur from the bay. Coming from a tough situation and overcoming certain obstacles, he was able to make it out and be a boss. My dad is my biggest influence, so that’s why I dedicated it to him. The very first mixtape I put out was the first ‘Showtime’ when I was 17. I’m definitely working on continuing the series and putting out a ‘Showtime 3.'”

Do you have another upcoming project or album in the works?

“I’m working on the ‘Glo Up.’ It’s coming real soon. I’m working on collaborative projects with ‘Iamsu!’ and another artist ‘Remedy.’ The third ‘Showtime’ album should be released shortly after so it’s all coming together.”

What’s the energy like whenever you perform in Chico?

“The energy is always crazy. There’s nothing like performing at the Senator. I like the house parties so you can touch the fans and make them feel like they can gravitate towards you. It’s rare for a lot of artists to get personal. In a lot of shows, most fans don’t even get to meet or shake hands with artists so I love doing it.”

What sets you apart from other artists, especially in the Bay Area scene?

“I would say being myself. Coming from the streets, not glorifying that lifestyle and originality is what sets me apart. I don’t imitate other artists and I have my own sound.”

What are your plans for the future as far as music and song writing goes?

“I see myself touring worldwide. I want to rep(resent) the bay but on a national scale. It’s cool to be known in the West Coast and all, but I want the whole world to feel that Bay Area energy.”

Do you have anything you’d like to say to your fans in Chico?

I love performing in Chico and always appreciate the love and support out here. Be ready for the new music coming soon!

Lastly, where can people find you on social media and keep up with your music?

Listen to more music on SoundCloud. My music is on most digital outlets as well.

Natasha Doron and Niyat Teferi can be reached at [email protected] or @theorion_arts on Twitter.