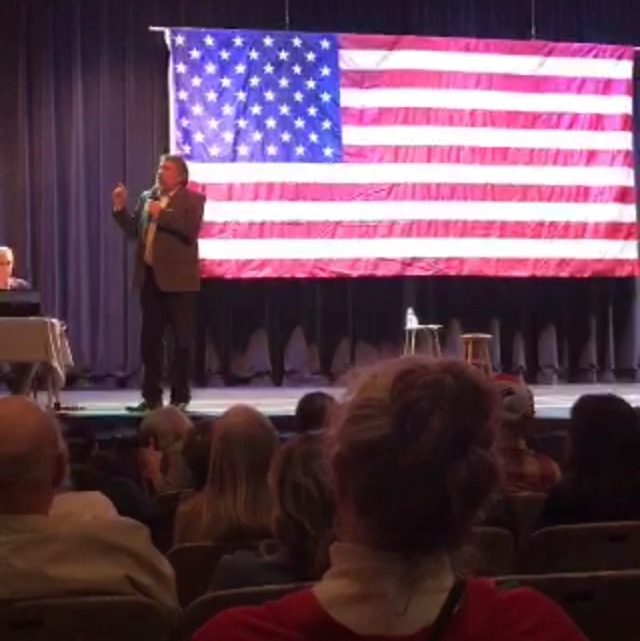 An audience member said during the town hall she does not want LaMalfa to have a say over her body. LaMalfa says that's fine but the tax payer shouldn't have to pay for it. Photo credit: Screenshot from Emily Bertolino's periscope

First District Congressman Doug LaMalfa heard many boos and some cheers at the town hall in Oroville April 17.

The Oroville State Theatre hosted a meeting from 5:30 to 7 p.m. Residents from the 1st congressional district, especially those from Butte County, were in attendance for the event. Around 460 people attended the town hall, according to the employees from the theatre.

LaMalfa tried beginning the meeting with a prayer. The crowd immediately began booing his attempts. People began chanting “separation of church and state.” Eventually, when the prayer concluded, everyone agreed on doing the Pledge of Allegiance before the question and answer portion of the town hall commenced.

For the next 30 minutes, LaMalfa listened to comments and answered questions his constituents had. These ranged from LaMalfa’s support of the Trump administration, his stance on Citizens United and beliefs on the separation of church and state. A middle schooler from Chico asked LaMalfa if he believes in the separation of church and state. The congressman said it’s not written in the Constitution.

During the town hall, David Phillips had a chance to ask questions. Phillips’ son was recently killed in a police officer involved shooting and he wanted to know what the representative was going to do about starting an independent investigate into the shooting and mental health awareness.

LaMalfa responded by saying the death of Desmond Phillips was a tragic event and that he’s been a pusher of bills benefiting the mentally ill while in congress. The congressman also asked Phillips for his personal information so they could set up a meeting and go more in depth on the passing of Desmond Phillips.

Afterward, LaMalfa began a presentation to explain the Affordable Healthcare Act’s failures. The crowd started yelling over anything the congressman had to say. LaMalfa left the stage during the middle of the presentation. When the crowd calmed down, he came back on stage to finish his explanation.

The congressman had some support throughout the night. A woman from Durham explained why Obamacare had been a disaster for her small business.

The night had some levity to it. One woman from the audience came painted in green. When LaMalfa asked why the green paint and she said, “I’m the wicked witch of the west, I take down corrupt politicians.” LaMalfa laughed and said the woman remined him of a character from Star Trek.

LaMalfa concluded the meeting around 7 p.m. and thanked the crowd for attending.