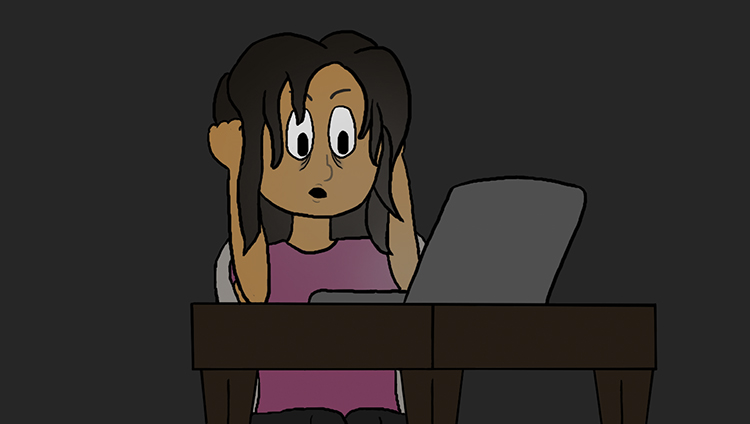 Crying, eating carbs, going outdoors, time management and simply winging it are a few things students do to deal with their stress while preparing for finals.

Eighty-five percent of college students feel overwhelmed by their workload and 30 percent of students say that stress has a negative effect on their performance, according to Anxiety and Depression Association of America.

With stress becoming normalized, students may not know there are resources to prevent and cope with it. Stress doesn’t need to suck.

“School equals stress, and if you aren’t stressed you might be doing something wrong,” said second-year Ani Lewis, a computer animation and game developer major.

That isn’t to say that all stress is bad. There is positive stress that can help you get more work done.

Lewis, a self-proclaimed procrastinator, said food is the best way to deal with the weight of taking five classes.

To help students de-stress, the university offers areas like the Zen Den and Zen Den II where students can sleep or just relax.

Elizabeth Picard, a fourth-year English major, said physically leaving the space where she does her work and go outside for a walk helps.

Besides dealing with stress when it hits, there are ways of easing into it without allowing it to completely mentally and emotionally take over.

Picard doesn’t use the Zen Den or resources on campus to deal with stress directly, but she uses the other academic resources like the Career Center and writing center. She tries use stress in a positive way and to prevent stress from building up too much.

Instead of allowing the workload to mount sky-high, by using resources on campus stress can become somewhat manageable.

Professors can ease the stress of finals by helping students prepare effectively. The number-one thing many students look for is a good study guide before an exam. Without it, there is just too much information to learn and retain in a short amount of time.

“I don’t expect professors to hold my hand. That’s not their job,” Picard says. But then pointed out that a well made study guide is important.

As finals creep up, stress is a big topic around campus. Both Picard and Lewis aren’t preparing for finals right now, but for good reason.

There is no point trying to cram an entire semester’s worth of information in at the last second. Not attending class is only going to add to a mountain of stress that students have been bringing upon themselves.

If stress is mounting beyond a coping point, the counseling center on campus offers a variety of resources including one-on-one appointments.

Although the counseling center is offered to all students, there are often too many people trying to schedule appointments at one time. During finals, getting an appointment is almost impossible.

With the end of the semester almost in reach and the momentum to get there is sputtering. Stress is all too real for most students. Dealing with the workload, using resources in advance and preparing throughout the semester prevents stress building up.

Professors can only do so much before it turns into hand-holding. Stress is part of college and students are here to learn how to deal with it in a positive and healthy way to get ready for the real world.

Susan Whaley can be reached at [email protected] or @susangeorgettew on Twitter.