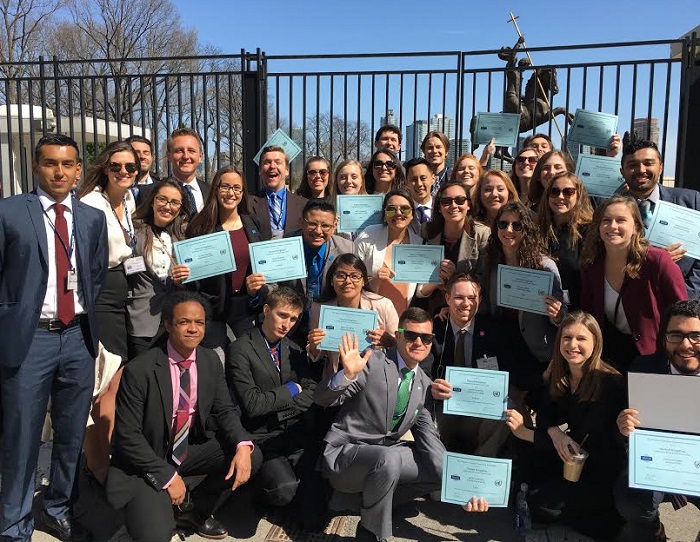 This award is the conference’s highest honor. This year, the team represented the United Kingdom.

The team took home 12 of 16 available position paper awards. No other school in the conference has come close this year, setting a new record for the Chico State’s team.

Students set aside nearly three months to conduct research about a range of global crisis for their papers. Chico State Model United Nations has attended the annual conference and taking home awards for the past 10 years. Their consistent success put them in the top 5 percent of out of nearly 200 participating universities and colleges on an international level.

Students prepared speeches, learned United Kingdom’s foreign policy and conducted simulations of committee meetings to prepare them for success. The team stood out in the conference by using no notes during speeches, showing up an hour before committee starts and defending and advancing their country’s policies.

“This is a great way to get students interested in international affairs, to understand the world system and understanding how nations talk to each other,” Crosby said. “To get students to stand up and talk in front of a large group, writing the position paper, doing research, these are skills everyone should know and this is a great vehicle to learn all these things.”

Representing the United Kingdom presented a challenge for this year’s delegates.

“Representing the UK at this time in history is a good choice for us,” Crosby said. “It’s a nation disengaging from the European Union and at intellectual odds with a rapidly globalizing world. It made the students understand what is going on in the United States, with the recent election. If we want to understand how the world works, we have to understand how other people see the same situation.”

“We chose the UK because I knew about the Brexit policy being advanced,” Crosby said. We wanted this one, so students can understand the nationalist sentiment going on in the world, not realizing we had our same issue in November. I like representing countries that are out there and trying to push their policy. Countries that are facing difficulties, changing or have certain issues with them. Any country like that would be fun to play.”

Crosby said that the success of the team is largely because of a healthy team dynamic.

“We have changed officers every year and each officer does things a little differently when running the program, but we consistently win. To me it shows the students as leaders are an effective model. They come together, form that bond, and experience the same things and we do well. It can be hard, we can pick an easy country and win. I just don’t want to do that I want to pick the hard ones and be successful.”

Cathy Fung can be reached at [email protected] or @cathyfung4 on Twitter.