#MarchforScience still had its problems 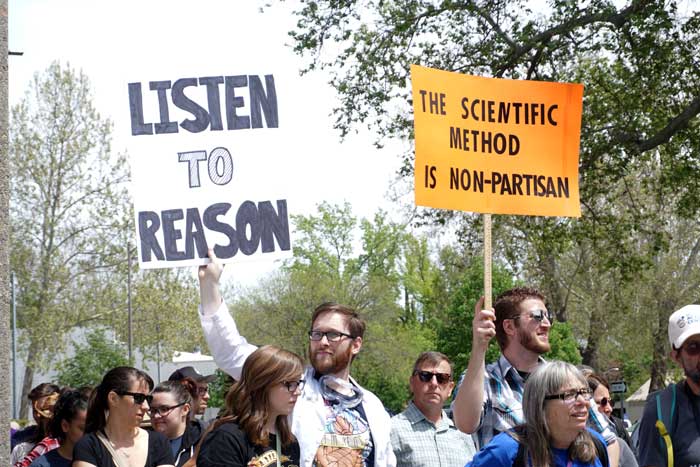 The March for Science did a great job in showcasing the importance of current scientific issues and triumphs to Americans, but there were still some problems.

Conversations about climate change are what dominated the events. It was fantastic to see such support towards a cause nationwide.

There is more than enough scientific evidence to prove that climate change is man-made and that investing in renewable energy is the best way to move forward. The science march brought these issues to light and helped spread awareness to people who might still be trying to disprove climate change.

Chico State held a great event where individuals could interact with booths and promote scientific endeavors.

The problem with the entire event is that there are still very big political overtones. Anti-Trump ideology, intersectionality, gender identity and anti-racism were some of the other topics at hand during the march.

These aren’t problematic topics, but there has to be a time and place for everything along with facts to back up claims that the organizers of the march made.

There is nothing wrong with promoting diversity in STEM fields. There is always a need for scientists and mathematicians, but to make claims that the lack of diversity in such fields is because of racist and sexist structural systems are simply not true.

People of color are over-represented in majors that provide less income. These are personal decisions made at the time of entering college. There will possibly never be true equity in a STEM field as long as white people dominate the population of the United States.

Hispanics and African Americans make up 29 percent of the population of the United States. Being a minority along with the fact that the two groups choose to major in non-STEM fields are the main reasons why there is inequality in STEM fields.

The march didn’t only attempt to exhibit the perceived social barriers of the STEM fields but also had strong anti-Trump tones. The only reason that this is problematic is because it wasn’t the point of the demonstration.

It’s great that people are beginning to become activists, but tying Trump into every movement is unnecessary. Trump has repeatedly denounced climate change as a hoax, but should not have been the center of the event.

This event shouldn’t have gone against Trump, instead, it should have given the due diligence that science deserves. People need to be aware of the changes that are going on, and not focus on the lies of social barriers within the STEM fields.

If people are going to talk about science, there needs to be factual honesty. Marches like this should be done in true support of their cause, not as a political message or as a way to talk about fake societal issues.

Roberto Fonseca can be reached at [email protected] or @rjfonseca13 on twitter.