Chico “Meets in the Middle” 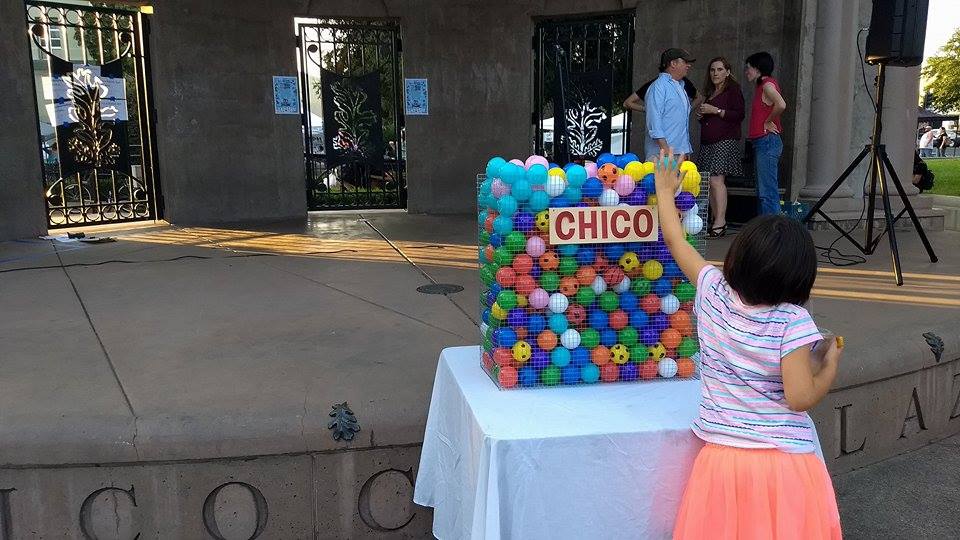 One Depolarize Chico coordinator, Kate McCarthy, stood behind a microphone on the plaza stage and explained the rules of the activity to participants.

“I’m going to ask you a series of questions, they are friendly questions. Some of them will apply to you, some will not. If your answer to any question is yes, please take a ball from the bowl in front of your group’s box and come up here and put the ball in this box,” McCarthy said as she pointed to a see-through, wire basket.

Depolarize Chico is one of five action groups that stem from Mobilize Chico, a community activist group that emerged after the 2016 election. This activity, however, was Depolarize Chico’s first community event.

“We started out just as a study group, we read a lot, we met and talked, we shared our experiences,” McCarthy said. “We decided we wanted to try to do something in the community to kind of reknit community, to build some kind of recognition, that in spite of our political differences there’s a great deal that we share.”

During and after the game people made their way to the edges of the plaza center where ten local clubs set up booths. Groups included; Chico Rod & Gun, Health Care for All, Chico Peace & Justice Center, College Republicans, the ACLU, First Christian Church Chico, Catalyst, Love Chapmantown Community Coalition, the Sierra Club and Mobilize Chico.

“I think this is a good way to show what Chico’s kind of always been about,” Chico State fourth year and activity participant Jeremy Markley said. “This is a good town, it’s a close knit community and we stay together even if the rest of America is crazy.”

Some members from Indivisible, a different Mobilize Chico action group, also showed their support of this gathering.

“I think this is the first step towards people opening their eyes to different culture, different religion and different political preference,” Indivisible member Jesse Shepherd said. “Indivisible wants people to unite, remain indivisible and know that your voice matters.”

By the end of the activity, a variety of plastic ball colors filled in the once see-through, wire basket.

McCarthy then asked the last question of the activity: Who believes that we are stronger united than divided?

Each boxed-in group then placed any remaining plastic balls into the wire basket and eleven groups quickly became one unified assembly.

Now that people left their tape boxes behind and mingled within the diverse mass, McCarthy concluded the event with a literal yet metaphorical statement.

“Rip up the tape, you’re not in boxes anymore.”

Alex Grant can be reached at [email protected] or at @theorionnews on Twitter.