Once upon a scene: drawing in the 360 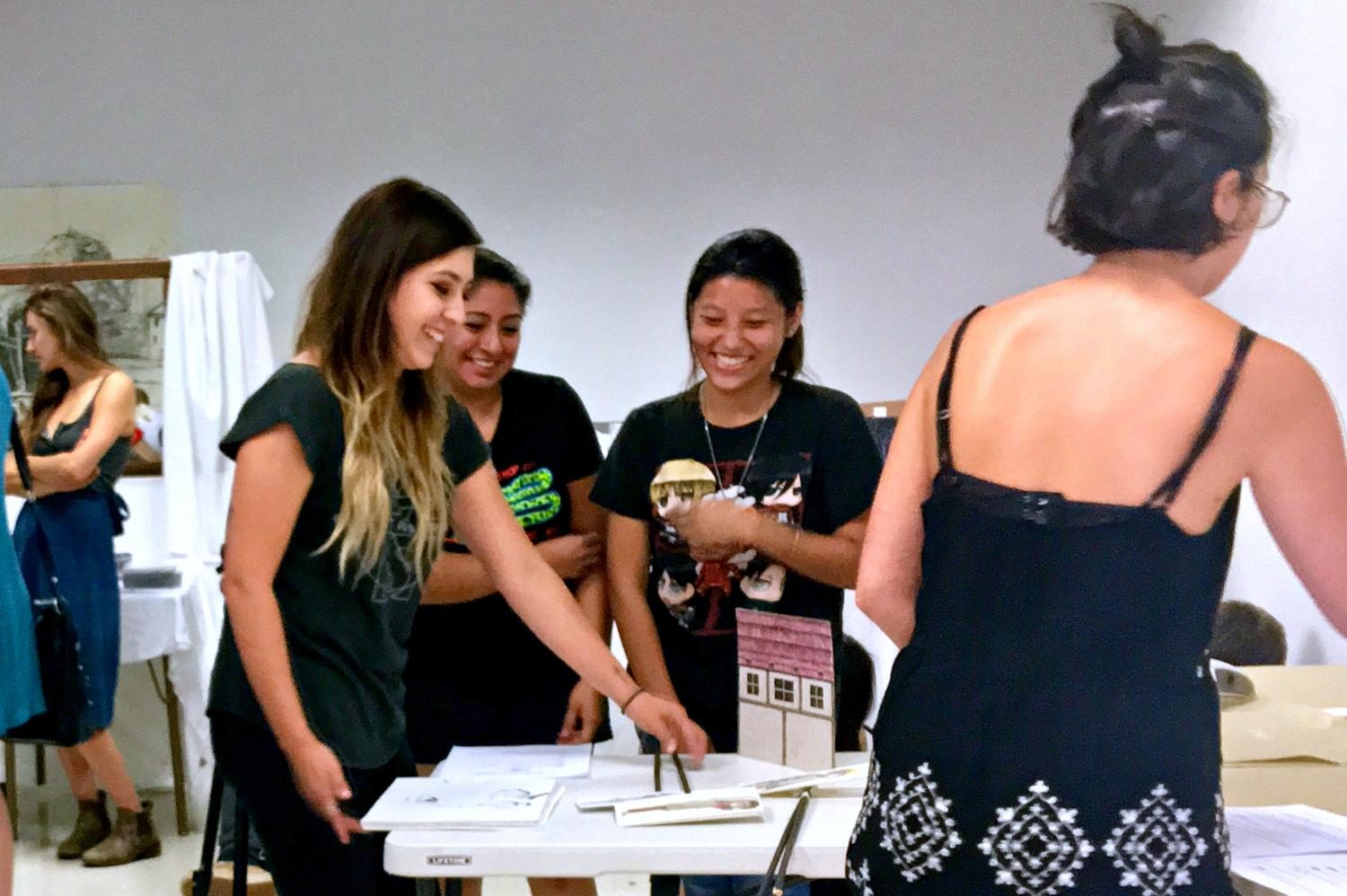 (From left to right) Patty Huerta, Jazmin Gonzalez, Mai Thao and Madison assembling all moving parts of their "Attack on Titan" performance-like presentation of its storyboard. Photo credit: Alejandra Solorio

On the first day of class, J. Pouwels, Foundation Coordinator and faculty of the Department of Art and Art History, assigned arts 325/425 (Intermediate and Advanced Drawing) an introductory project designed to move away from the ease of a pencil and sketchpad. Instead of assigning a study of objects or figures, he demanded something from students that would put them out of their drawing comfort zone: drawing for performance.

“There’s a lot of room in a project like this for students to draw but there’s (also) room for students to act up, act out, play and have fun,” Pouwels said. “They get to be really creative with how they use drawing and how they’re going to portray their narrative.”

The project instructions were as followed: design a storyboard from a film’s most poignant scene, storyboard it and bring it to life with performance.

Pouwels assigned the storyboarding project, a sequence of story-telling sketches, to be designed, constructed and performed in a matter of two weeks. One week of idea development and drawing, and another organizing all of the moving parts.

“It was great seeing (our story) come alive in a gallery,” said Patty Huerta, arts 325 student. “Personally for me, I’ve never had any of my work in the gallery and this was a great first opportunity.”

Pouwels’ background in collaboration-based work, such as music and performing with a band in his younger years, influenced the premise for this project. Not only that, but who doesn’t enjoy movies? Utilizing a project like this pushes the boundary for what drawing is and demands one to think outside of the box.

“Drawing isn’t just one thing,” Pouwels said. “It can be many, many different things. By doing an assignment like this, I’m hoping we build some camaraderie, realize just how flexible the medium is, learn trust and last but by no means least, have some fun.”

The overall outcome was a room open with endless opportunity for creativity and big laughs. The collaboration process allows for idea development, open communication and gregariousness. A reprieve from the traditional, this class project is a great example for modernization of the traditional arts.

“I’m always blown away by what the students are able to come up with,” Pouwels said. “No matter what the curve ball, they get through it. The part that makes teaching exciting is the invention, creativity, and enthusiasm in the students.”