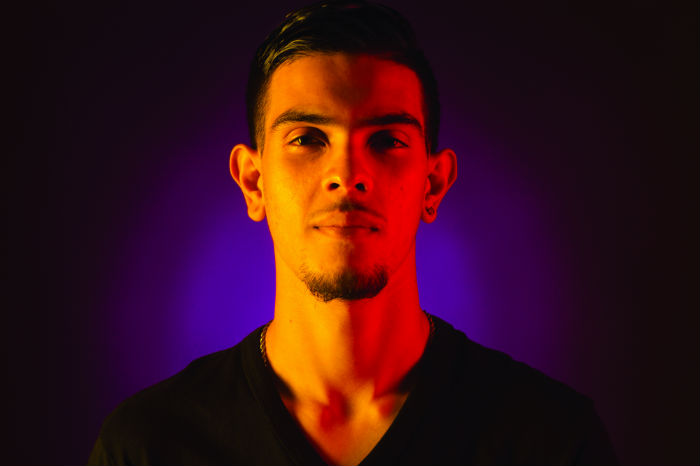 The moment after he crafted his first song, he realized his potential. He couldn’t sleep, couldn’t eat and, most definitely, couldn’t stop creating music. This is Chuma.

Christopher “Chuma” Zamora didn’t always think he’d be a singer. It wasn’t until he entered college that he’d consider being a reggaeton artist as a prospective career. Fast forward four years later and he’s signed to Platinum Music Records and awaiting the release of his first album “Yo Soy Chuma,” (I Am Chuma) in early 2018.

The Business Administration major and reggaeton aficionado began sharing his music on Youtube. The wide variety of content Zamora focuses on are his relatable experiences. His catchy tunes follow the themes from the root of reggaeton’s origins, catering to the underground and Hispanic youth: partying, friendship, love and lust.

“I feel like if you make a song that connects with someone’s feelings, then that’s how you’re gonna get your song out there,” Chuma said. “Who hasn’t gotten their heart broken? Who hasn’t really liked someone? Who hasn’t had a crazy night?”

Chuma lived in Yuba City for the first 10 years of his life before relocating several times to Guanajuato, Mexico. There, he got a taste for performance when he joined a banda which no longer exists today. A “banda” is a Mexican ensemble comprised of brass, wind and percussion instruments.

Close communications to producers through Instagram, mostly from the heart of reggaeton in Puerto Rico or Colombia, led Chuma to his current associations with music label “Platinum Music Records,” based in Marysville, California.

“A big reason I joined [Platinum Music Records] label is because they can get me on Spotify,” Chuma said. “It’s not like I’m signed for Hollywood. It’s just a small step, but it’s a huge step compared to when I was 18 recording in my room with my laptop.”

Being an artist comes with its own set of challenges. Chuma reflected on his development and the struggle dealing with technical skills he needed to develop in order to thrive with his music-related projects. Editing and recording go hand in hand. Not only that, but recording often and creating music with its own signature.

“I personally know a lot of local artists, and non-local artists, that thought they were artists or could make music but only had one song,” Chuma said. “That’s not being a [well-developed] artist, you need to have a lot of content out there.”

This is just the beginning for Chuma, but there is still so much to experience and accomplish. The test of time will show the hours of dedication to both a talent and a skill; the art of musical development.

Chuma’s first song was finished in four days over four years ago. Since then, he hasn’t stopped.