Chico Community Ballet presents their own Chico-version of ‘The Nutcracker’ 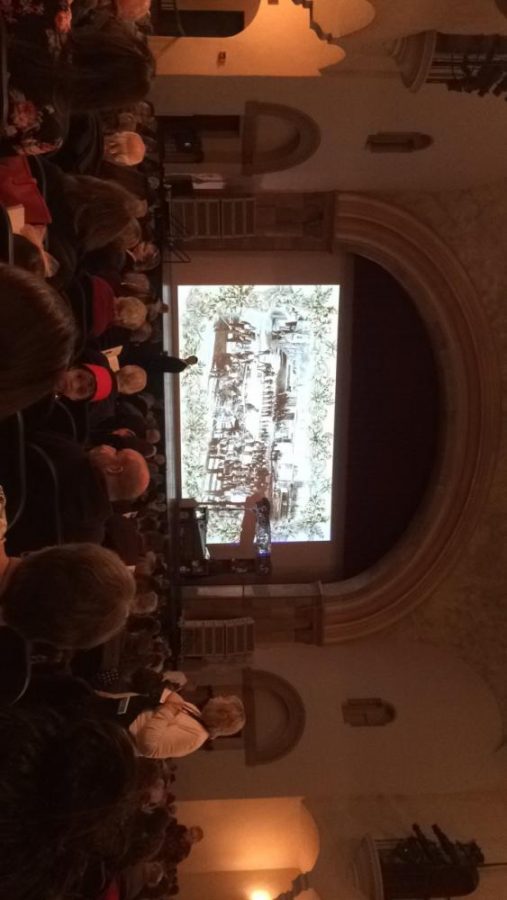 Before The Nutcracker, they played a slideshow with pictures from Chico at the turn of the century. Photo credit: Caitlyn Young

There are hundreds of Christmas-related traditions across the world, and everyone celebrates Christmas in their own way. For some families, a common tradition is to go see “The Nutcracker” every year.

“The Nutcracker” is a classic Christmas tale of a girl named Clara and her handsome Nutcracker prince who comes alive and takes her on a magical adventure to go see the Sugarplum Fairy. Traditionally in a ballet performance, the characters never have any dialogue, but the story is easily understood through exaggerated body language, intricate set designs and beautiful dance numbers.

Before the show began, it was obvious that it was not going to be the traditional “Nutcracker” setting, but it was going to take place in Chico. While audience members filled in and found their seats, a slideshow played with pictures from the Chico community during Christmastime at the turn of the century.

Instead of the generic wealthy family home where Clara’s parents are hosting Christmas party, the story begins in Chico’s own historical home, The Stansbury Home. By default, Clara’s character was turned into a woman who actually lived in the Stansbury home. Angeline Stansbury lived in her family home until her death on Christmas in 1974. Due to Stansbury’s keen upkeep and care of the house, it is now preserved as a model for what Victorian life looked like in Chico.

In addition to changing Clara’s character to Angeline, there were other changes to the cast to make the show “a very Chico” production. The Snow Queen and Sugarplum Fairy were changed to the Almond Blossom Queen and the Queen of the Wildflowers.

Other than the subtle Chico changes, the performance was as excellent and magical as the traditional Nutcracker. Between beautifully designed costumes, talented dancers and creative sets, “A Very Chico Nutcracker” definitely put the audience in the right Christmas mood.