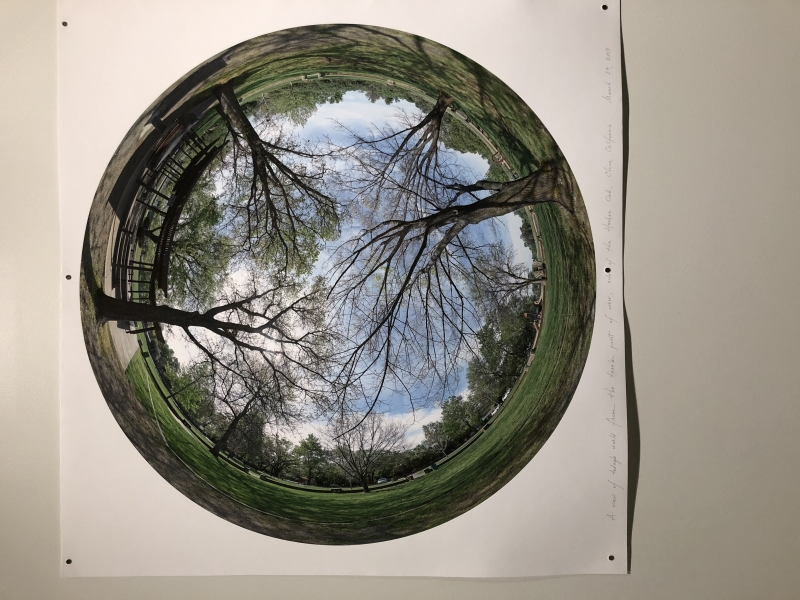 What the Hooker Oak tree would see if it was still standing today. Photo credit: Jessica Carvajal Castillo

“Vanished” takes you on a trip to explore four lost icons: the Hooker Oak tree, a lost mammoth tooth, a missing volcano and Ishi, the last of the Yahi. The exhibit follows six collaborators as they explore four lost icons in the world. They link each piece using myth, memory, fact and fiction. The six collaborators included visual artists, a philosopher, writer, volcanologist and graphic designer.

“A Columbian Mammoth in Bidwell Park: Lost, Found, then Lost Again” focuses on a Mammoth tooth finding in Bidwell Park. There is a book in the exhibit called “The Tiny Book of Mammoth Molars,” which contains drawings of what people imagine what a mammoth tooth looks like. Artist Sheri Simons turned the drawings and made them into pieces.

Another piece of “Vanished” is “The Missing Mount Tehama: A Vanished Stratovolcano,” which is about a volcano that was active, but has since eroded down and eventually vanished.

“The volcano was active about 600,000 years ago, but slowly died out and through erosion and through other nearly volcanic activity is now a caldera,” said Kelly Lindner, the curator of the Jacki Headley University Art Gallery.

“The Sudden Void: The Fall of the Hooker Oak” is a set of images following the tree’s lifespan. The Hooker Oak tree averaged 100 feet tall. The tree fell in 1977 and the stump still remained until it was set on fire. After the fire, Simons gathered ash from the tree and used in one of her pieces instead of using charcoal, which is how these pieces are linked with each other, even though they were created by different artists.

The piece has a few interactive features to it. For example, the artist took a photo and put it together with a leaf that fell from the tree. It features a young girl at the trunk of the tree that was placed on the stem of the leaf.

All of these pieces can be found in the Meriam Library 305, the Valene L. Smith Museum of Anthropology and the Jacki Headley University Art Gallery. This exhibit will be open until Friday.