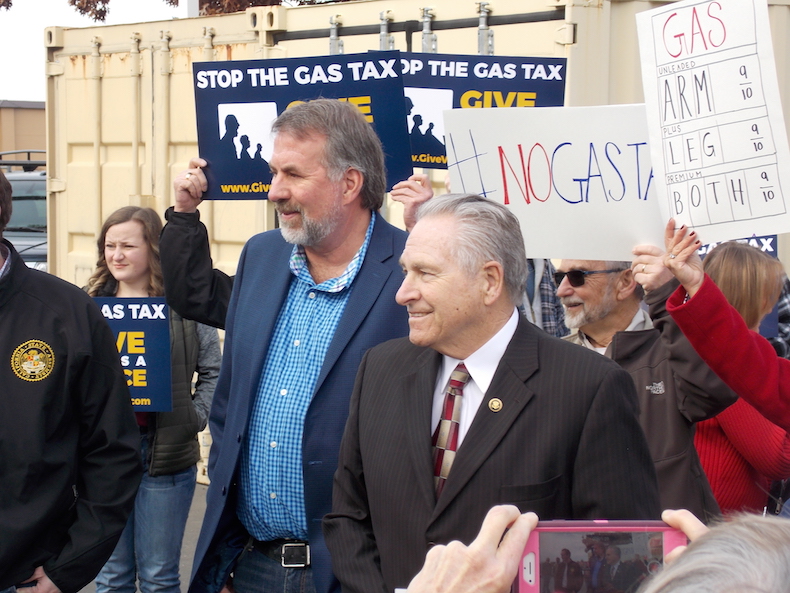 Representative Doug LaMalfa came to Chico to endorse a petition for repealing a gas tax Friday.

The petition signing event took place at the Sinclair gas station on the block of Forest Avenue from 12 p.m. until 2 p.m.

LaMalfa (R) was joined by California Senator Jim Nielsen (R) to speak in favor of the initiative to repeal the recently introduced gas tax.

With enough signatures, a vote would be placed on the November ballot that, along with repealing the recent tax, would also require voter approval for any future gas or car tax increases.

Congressman LaMalfa said the initiative is about giving the power back to the voter.

“If voters like the tax then they can say nay to it. But if they don’t, then it gives them a say and voice instead of more taxes,” said LaMalfa.

Protesters also attended the event, lining the sidewalk. Some carried signs which read, “LaMalfa got the goldmine, we got the shaft,” and “Repeal and replace LaMalfa,” and chanted as LaMalfa addressed the crowd.

“Can you believe it? We got people yelling to raise our taxes!” said Senator Nielsen.

Josh Cozine can be reached at [email protected] or @theorion_news on Twitter.