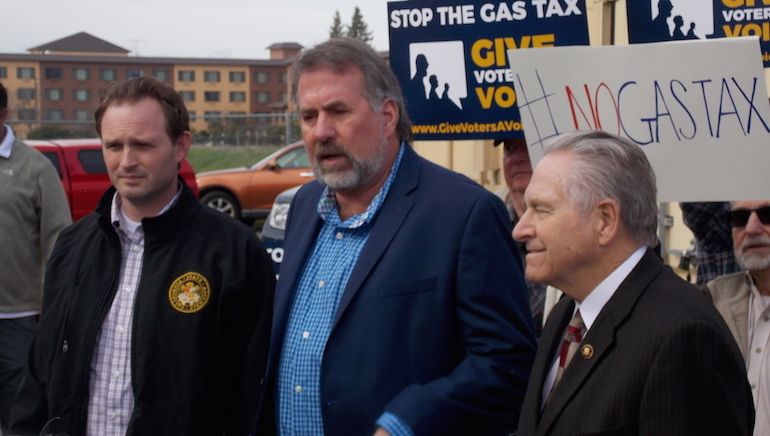 Three Republican incumbents made an appearance at the Sinclair Gas Station on Friday for a petition signing event and press conference.

Representative Doug LaMalfa, Senator Jim Nielsen and Assembly Member James Gallagher showed up to endorse an initiative that would repeal a gas tax increase that took effect in November. Members of the Democratic National Committee were also there to explain their views on the importance of this tax. Protesters also appeared to voice some disapproval of the repeal, but mostly to vocalize their disapproval of LaMalfa.

LaMalfa arrived before the noon starting time to listen to concerns from locals and answer questions with people one-on-one while others trickled in to sign the petition against the gas tax.

The initiative is about “giving the voters a voice,” LaMalfa said.

Senate Bill 1 passed the state legislature last April with a two-thirds majority across party lines save one. According to LaMalfa, this bill increased the state gas taxes from 18 cents to 30 cents per gallon without a public say on the bill.

If passed, the initiative would also require voter approval for any future gas tax increases.

LaMalfa said that this tax increase isn’t needed, especially at a time when the state has a budget surplus. The legislature simply thinks it can “go to the well for more taxes,” he said.

He also noted that in the wording of the bill, not all funds would have to be properly earmarked for transportation, with much instead ending up in the general budget.

Nielsen voiced similar concerns about where the tax money goes.

“(Where the money goes) is dependent on an amendment that hasn’t even been put on the ballot,” Nielsen said. “(This tax) hits lower and middle incomes the hardest, while we have a surplus.”

Bob Mulholland, a democratic campaign strategist and DNC member, was also at the event to give his opinion on the repeal initiative and to show why the tax is important to locals. According to Mulholland, the increases are necessary to repair some of California’s worst roads.

He also mentioned that the increases are significantly less than possible gas tax increases President Trump has been considering.

“It’s a political stunt, plain and simple,” Mulholland said. “Look at Highway 70. People are tired of all the deaths on that road. It needs to be four lanes and Republicans are doing this political stunt and saying we can repair it for cheap. If they get their way, we’ll be put in the back of the line.”

Protesters lined the sidewalks of the gas station, carrying signs and banners, oftentimes shouting in LaMalfa’s direction during the event.

Jean Andrews of Women on Reproductive Rights (WORD), an action group under Mobilize Chico, carried a sign that read, “We need the gas tax to fix our lousy roads. Don’t fall for Doug’s stupid publicity stunt.” Andrews said she thinks the tax is necessary for California’s road system and she is determined to get LaMalfa out of office in the November election.

Many others were angry at LaMalfa’s track record with other policies and carried signs in support of DACA and women’s reproductive rights.

As more people began to show up to sign the petition, LaMalfa, Nielsen and Gallagher took center stage to speak on why they endorse the petition.

Protesters used the opportunity to begin loudly chanting and booing at LaMalfa. Phrases like, “We want LaMalfa out,” “Dump Doug,” and “Repeal and replace LaMalfa” could be heard from across the crowded gas station, almost drowning out the representative’s words at times.

“If these people wanna pay more taxes, let them send it in,” LaMalfa said to the mostly white and older crowd gathering to sign the petition.

“Can you believe it? We got people yelling to raise our taxes,” said Nielsen, garnering a laugh from the crowd.

As the press event continued, it became apparent why the protesters were relegated to the sidewalks when two people came forward, one holding a sign advocating for Planned Parenthood tucked under her arm. They were ushered away by men in black coats with “Team Nielsen” written in gold on the back.

The event concluded with the representatives imploring attendees to share the petition but also promising that the repeal would pass.

On the far edge of the sidewalk Marcia Tarabini stood with a sign that read, “less red or blue, more purple.”

However, she drew little attention that day.