‘Jim and Andy’ depicts two comedians in one body 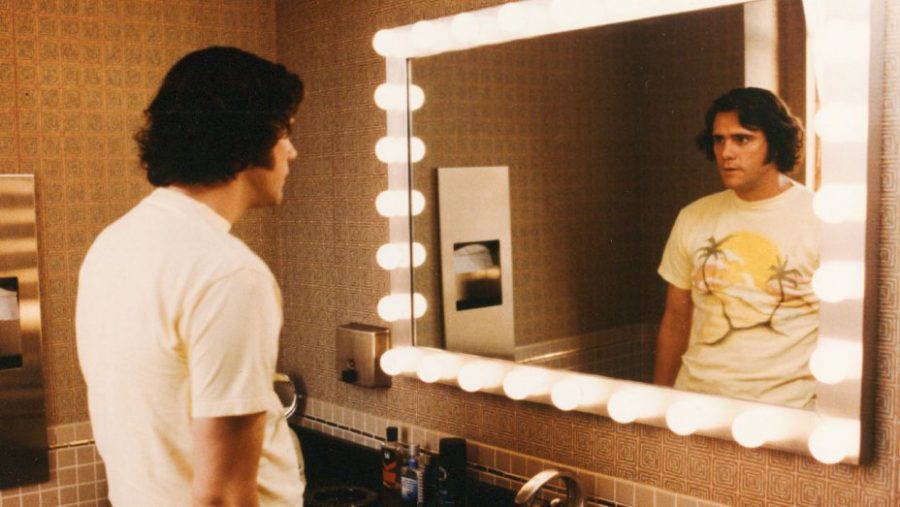 Jim Carrey as Kandy Kaufman staring at himself. image from imdb.com

When Jim Carrey took on the role of dead comedian Andy Kaufman for the 1999 movie “Man on the Moon” he was committed to embodying Kaufman in a way that no one else could. “Jim and Andy: The Great Beyond” shows the behind-the-scenes drama and absurdity that occurred during the filming of the movie.

The documentary begins with modern day footage of Carrey sitting down and being interviewed about what the role of Andy Kaufman meant to him. Carrey was a big fan of Kaufman’s work and what he represented.

To Carrey, Kaufman was someone who was existing in his own world, and he greatly admired his approach to comedy. According to Carrey, when he was on set it was like the spirit of Kaufman took over and Carrey would refuse to break character when he was doing anything associated the movie.

When watching the footage from the set of the movie it’s clear that Carrey was committed to acting like Kaufman whether the cameras were rolling or not. The people on set who knew Kaufman personally, including Kaufman’s family members, all said that it was uncanny how well Carrey emulated Kaufman’s mannerisms and personality.

It’s funny to see Carrey constantly messing with cast members and causing problems on set all the time. Carrey’s tantrums and desire to be as disruptive as possible only escalate which creates a sense of excitement while watching this documentary.

The most interesting element of the whole documentary was seeing the attitudes of cast members change over time. Actors like Danny DeVito were initially annoyed with Carrey’s antics, but as filming went on he started talking to Carrey as if he really was Andy Kaufman. Kaufman’s daughter and brother said it was therapeutic to have conversations with Carrey, to them it was an opportunity to say things they never got the chance to.

According to producers who worked with Kaufman, he was always very respectful off set. However, Carrey always antagonized Lawler behind the scenes by using the same insults that Kaufman used in videos to promote their matches. Carrey never seemed to turn the switch off and made Kaufman look like someone who was always in character.

While that aspect of Carrey’s performance lacked complexity, hearing Carrey talk about how the film impacted his life was very interesting. After portraying Kaufman, someone who seemingly didn’t care about anything, for so long Carrey began to question his own life choices. While in character, Carrey would criticize himself as if he were a different person by saying that he was too concerned with what everyone thought.

After filming the movie Carrey couldn’t look at life the same way anymore. This deep introspection gives the viewer a new perspective on who Jim Carey became in the later part of his life.

“Jim and Andy: The Great Beyond” is as funny as it is interesting, just like Kaufman. The old footage from the 1999 movie and modern interview footage of Carrey is woven together extremely well. While there a couple of problem with Carrey’s performance during the movie that doesn’t really affect this documentary. For that, it earns five stars.