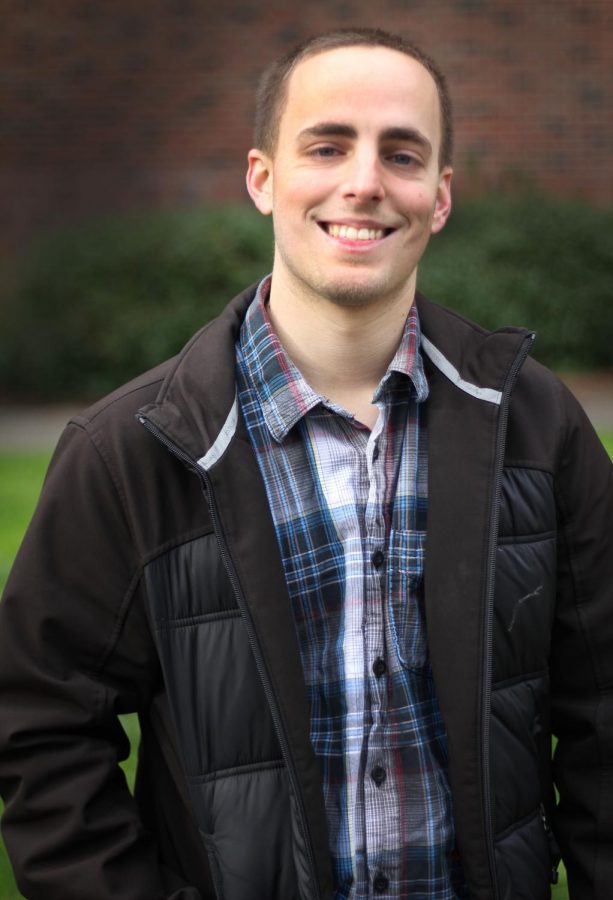 Jeremy Markley, a senior at Chico State, is running for one of three vacant city council spots up for election next November.

Markley considers himself a native of Chico and Redding, but has been involved in Chico politics for years. He is an Air Force veteran and plans to graduate from Chico State this spring as an International Relations major.

Markley said his first step toward political involvement happened when he joined the Air Force.

“It got me in the mindset (that) if there’s something that needs to get done, you do it,” he said. “I took that into college with me.”

Markley joined the Chico State Democratic Club as a student in 2015 and became president in January 2017. This role led him to other efforts, such as helping found Mobilize Chico and deciding to run for city council last August.

After Markley stepped down as Democratic club president last semester, he chose to pass the presidential duties on to volunteer Brigitte Dahrouj while he was still in college to mentor her.

Dahrouj, a sophomore and Chico native, said she chose to go to her hometown college because of the “sense of community” and opportunity for involvement she saw in Chico State.

She described Markley as, “extremely brilliant, really passionate,” and she believes he “exemplifies the type of young people that we want in politics.”

“I think that oftentimes people are fearful of the concept of young people getting involved in politics or running for office because they assume that they’re naive or don’t know what they’re doing,” Dahrouj said. “But Jeremy has such a well-rounded background that I feel confident in his abilities to perform this job.”

Markley said that he sees opportunity in Chico which he describes as a “microcosm of America” with a very Democratic center and a relatively “purple” overall population in terms of political leanings.

“In a lot of areas you can see very conservative and very liberal elements living, comparatively speaking, side by side,” Markley said. “There’s an opportunity for dialogue and an opportunity for cooperation that we don’t always necessarily like, but in a lot of ways I think is healthy.”

“There are demands on county and city leadership that I don’t think are getting addressed,” he said. “It represents a time and a place for us to sit down and recognize what works and what doesn’t.”

According to Markley, Chico’s politics are “unfortunately really partisan and bitter,” and cynicism and toxicity are rampant at City Council meetings.

“I didn’t expect the toxicity,” he said, adding that the conservative majority in the city council doesn’t seem to care about the progressive majority in Chico. In Markley’s view, the majority holds the poorer members of Chico’s community “in contempt ” and City Council has demonstrated a willingness to ignore collected data on town issues.

Markley believes that the main issues Chico faces are poverty, homelessness and a mismanaged city budget. He said the only city department at maximum staffing level is the police department, despite a previous misconception among some that Chico law enforcement is understaffed.

“While I have no problem with the police, the current city budget is not in a place where it can continue to handle a constantly growing police department,” Markley said. “The city owes more than $110 million in unfunded pensions alone.”

Markley feels that as a college student and community member he can bring needed change to the council.

“There’s a contempt for regular people and Chico citizens on the part of the current council,” he said. “There’s an unwillingness to listen and understand because (council members) correctly understand that they’re bad council members and we’re not going to vote for them, so why should they care what we think?”

Markley insisted that making changes isn’t as hard as some may think and that students that want to get involved should start coming to events.

“I ended up in the place where I am…because I literally just started showing up,” he said.

“If a student is interested in making a positive effort in their community, they really don’t have to do much,” Markley said. “Start attending some of these meetings, find out where things are, find groups to be involved in, volunteer from time to time and you’d be amazed what you can do.”

According to Markley those in politics making decisions are often older and are looking for the next generation to arrive and take control.

“We can’t undo the presidency, we can’t undo all these big things, but Chico’s a much easier target, and I wish more people recognized that.”

Markley invites anyone wanting to learn more about him and the details of his campaign to an event at Kinder’s where he will be speaking 6 p.m. on Friday.