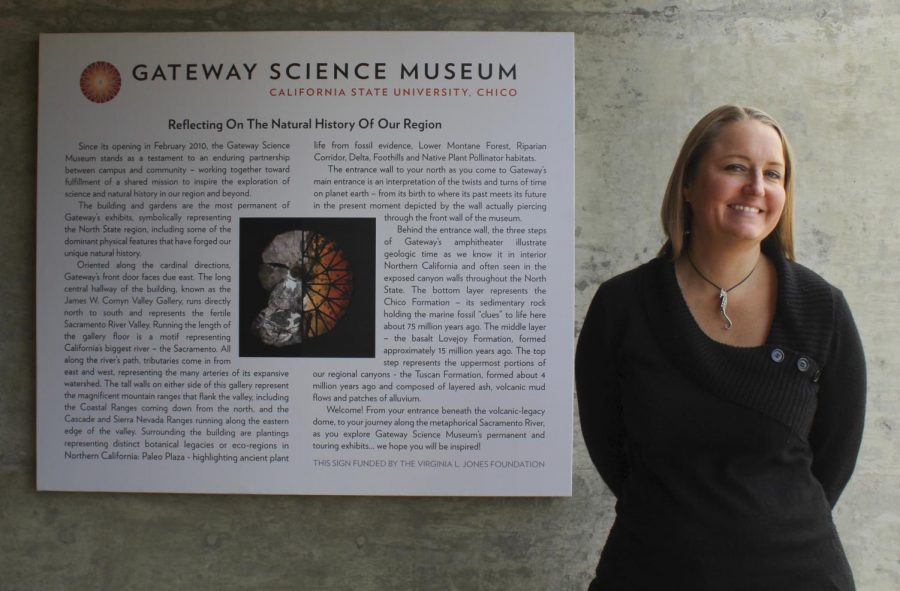 After a months-long national search, Chico state has named Adrienne McGraw as the new executive director of Gateway Science Museum. This image taken on January 25th shows the new director standing in front of the museum. Photo credit: Anne Chamberlain

After a lengthy search, Chico State named Adrienne McGraw as the new executive director for the Gateway Science Museum on Jan. 9.

As a child, McGraw spent her summers surrounded by trees at Kings Canyon National Park.

“When I was a kid, my father was a park ranger,” McGraw said. “So we lived every summer at Kings Canyon National Park and I just grew up around the park and trees.”

Years later, McGraw and her father taught and developed a class together for the Osher Lifelong Learning Institute program at UC Berkeley. The class focused on the tallest, oldest and largest trees in California.

“(The class taught) the natural history of the trees, a cultural history of our relationship with those trees and a bit of a bioregional look at California having these amazing trees,” McGraw said.

As director, McGraw is looking forward to having more student and staff involvement by having them help with the new exhibits planned for the new science building.

“We may have exhibits here or programs that faculty or students are curating or coming up with,” McGraw said.

Before taking on this new position and starting her career path, McGraw went to college for eight years and received three different degrees from three different universities.

From 2010 to 2017, she worked as a Museum Studies faculty member and main thesis adviser at JFK University. Prior to these roles, McGraw was an Education Director at Filoli, Hayward Historical Society and Fresno Historical Society.

McGraw also worked from 2008 to 2013 as the executive director of Exhibit Envoy, a non-profit that develops traveling exhibitions.

During her time at Hayward Historical Society and Exhibit Envoy, McGraw worked for Jim DeMersman who described her as a “phenomenal” employee.

“She is just very resourceful and came up with creative ideas (for) programs and solved problems,” DeMersman said. “She has real passion for science and the world.”

She credits this exhibit as the place where she first came in contact with Chico State.

“When I worked for Exhibit Envoy, some of my exhibits came here to Gateway,” McGraw said.

While at Exhibit Envoy, McGraw learned about smaller museums and had the opportunity to work with different art, science and history museums. Some of McGraw’s job duties as executive director of Gateway consist of collaborating with staff and working with public organizations.

McGraw is also working with the College of Natural Science and is responsible for anything concerning museum fundraising and its budget.

One of her main goals is to get more students and faculty involved with Gateway so they can collaborate with new concepts and exhibits at the museum.

“I would really like to hear from students if they have any ideas about how we can be more exciting and relevant in their lives,” McGraw said.