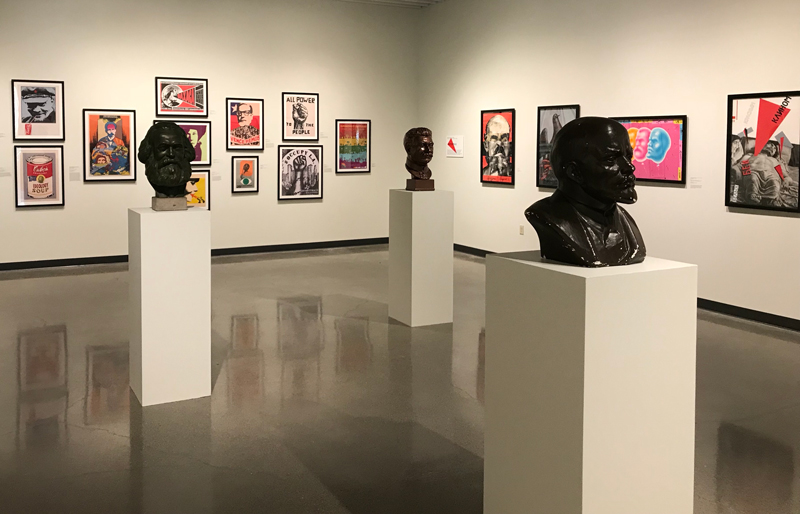 The social and political impact of the Russian Revolution is conveyed through artwork in a new art exhibit on campus.

With photographs and artwork throughout the 20th Century are, “Revolutionizing the World?” displays the history of the Russian Revolution of 1917 through four different sections, Designing, Commemorating, Protesting and Globalizing.

Photographs and art pieces are displayed to show and communicate ideas of individualism and solidarity. These ideas resonated with many Bolsheviks during the revolution.

Several pieces in this section also include photographs and illustrations that highlight the downfall of the Romanov Dynasty and promoted socialistic ideas as a way to progress toward a better future and spark revolution throughout Europe.

Many pieces of artwork are displayed to showcase how people of the Soviet Union celebrated the 50th, 60th and 70th anniversaries of the Russian Revolution.

Several of these pieces, including a porcelain plate with an illustration of Bolsheviks “The Storming of the Winter Palace,” originated from the Eastern Bloc in celebration of the revolution.

At the center of this exhibit, busts of Karl Marx, Vladimir Lenin and Joseph Stalin are presented. They were borrowed from the Wende Museum of the Cold War in Culver City, California. The creators of the busts are unknown.

These pieces come from the Perestroika Movement, which promoted reform within the Soviet Union’s government during the 1980s. Mikhail Gorbachev’s glasnost policy of having a more open and transparent government inspired the artwork.

Many of the pieces show how the Russian Revolution of 1917 was politically significant and how it resonated in other parts of the world.

Some of the pieces in this section are from the “non-communist world,” including the U.S., Africa, Asia and Latin America.

“Revolutionizing the World? The Russian Revolution at its Centenary, 1917-2017,” is a traveling art exhibit that will be displayed at the Jacki Headly University Art Gallery until March 16.

The art gallery is open Monday through Friday from 10 a.m. to 4 p.m. and on Saturday from noon to 4 p.m.

To learn more about the art exhibit, “Revolutionizing the World?,” visit their website.

Angel Ortega can be reached at [email protected] or @theorion_arts on Twitter.