‘Through The Red Door’ book signing at Chico State gets emotional 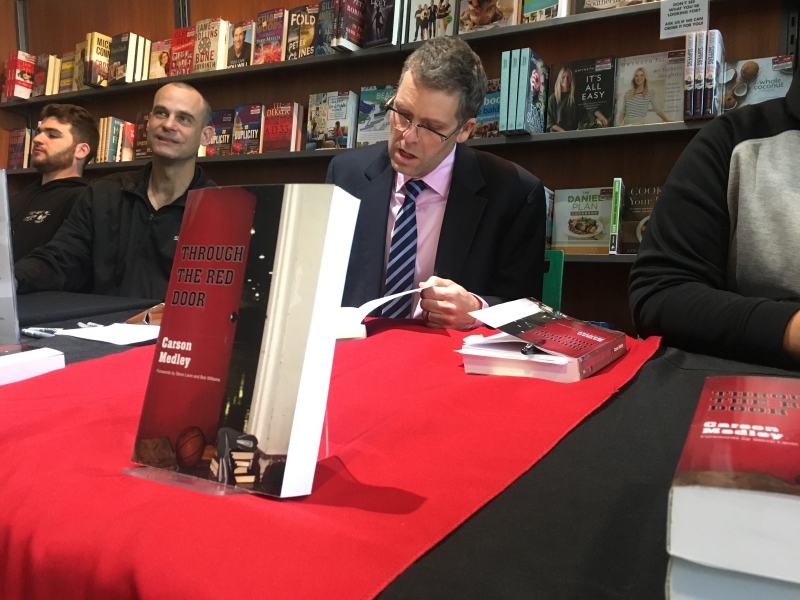 “Through The Red Door,” by Carson Medley gives readers an all access look at the highlights of the 2015-2016 Chico State men’s basketball team.

Medley followed around the team as if he was one of them during their championship season, having access to all video sessions, practices and behind the scenes times with the team.

Head Coach Greg Clink was on hand at the event to sign books and to say a few words about the author that followed his team during one of Chico State basketball’s most successful years.

Clink formerly introduced Medley to the crowd of about 30 that crammed into the back end of the book store at Chico State.

“He (Medley) wanted to follow the basketball team for a year,” Clink said. “At first, I was kind of apprehensive about what that would mean, and then I read what he wrote and how he wrote it and thought this could be a really cool thing.”

Medley would immediately recognize almost everyone who showed up for the book signing and would thank them for their support.

Medley’s biggest supporter was his wife, who helped him pick out the cover photo for his book.

“A great example of what happened with this book cover, was that I wanted something that looked like a ’70s throwback,” Medley said. “I grabbed my photographer, Luke, and took some photos. I tested out my wife and she said ‘Oh my god that door looks awful. Who would want to walk through that,’ and that’s when I knew I had a cover.”

Medley would start to praise Coach Clink early and often.

Medley then read the prologue of his book for the audience.

“Whenever I go to a reading, it always drives me mad when someone reads the last chapter of the book or the middle of the book and I haven’t even read it yet. So, I’m going to start with the prologue,” said Medley.

The prologue would mostly cover a meeting at Coach Clink’s house of former players who sang their praises of their former coach.

As Medley read the beginning portion of his book, he became noticeably emotional with sniffles coming out between each sentence, but he maintained composure and finished.

Coach Clink and his former players were at the center of Medley’s prologue, with both Medley and players speaking about the importance of the coach and praising him with nearly every sentence.

“After following Coach Clink around I realized this coach knows everything,” Medley said. “This season was like catching lightning in a bottle with winning the championship and Coach Clink winning coach of the year.”

After reading his prologue and answering a few questions, Clink and Medley went back to signing books for the rest of the event.

“Through The Red Door” is currently listed as the top selling college sports book on Amazon.