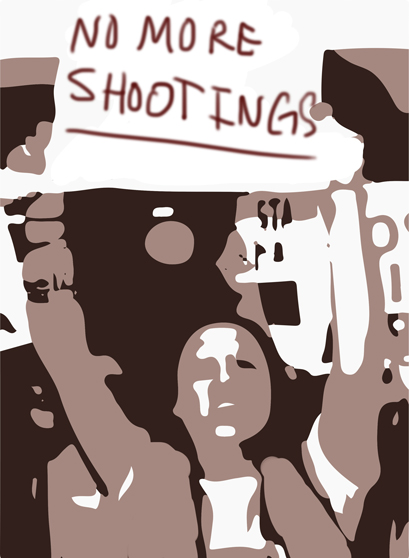 Mass shootings, violence and terrorism almost seem to be the norm recently.

Headlines continue to show the number of casualties and the number of wounded individuals that have been reported. The latest mass shooting at Marjory Stoneman Douglas High School in Parkland, Florida is something different because it has given young political activists a voice and they will continue to protest until their deceased and wounded classmates are given justice.

This is the best reaction we could have seen after such a traumatic event. Politicians, presidents and others in power always vow that this will not happen again but then fail to do anything about it. It’s young activists that are rising up after horrific events that will make change happen.

Criticism has surfaced and conspiracies have spread in order to delegitimize these young activists. Many are blaming the democratic party for these protests, stating that “this is all their doing in order to push anti-gun policies.”

How heartless can this country be? It’s almost as if these young survivors are not mourning their peers and feeling strong emotions that push them to get involved in politics so they won’t have to face these tragic events ever again.

Our representatives and politicians argue that the internet desensitizes terrible events like this and the country should have time to mourn those who don’t make it.

This country, especially the students, are tired of mourning and would like to reach a point where “sending thoughts and prayers” isn’t trending on the internet every other week.

Students in this country are the future and belittling them simply because of their age is ignorant. These students be will voting soon and will begin voting against outdated policies which allow mass shootings to continue.

Instead of looking down on a movement started by teenagers, we should be inspired. Is this not what this country has continuously asked for?

We are now seeing students show up to town hall meetings and demanding change.

Instead of belittling this movement simply because it was started by Americans who cannot legally drink yet, we should feel even more inclined to step up and follow in their footsteps.

Nicte Hernandez can be reached at [email protected] or @nicteh7 on Twitter.