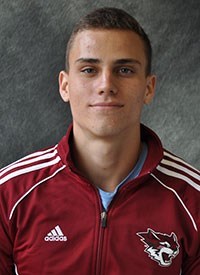 Before the final event could start, the meet had to be delayed 45 minutes due to lightning in the area.

The Chico State Wildcats track and field team competed in Turlock, CA Friday and Saturday and finished with some top results.

Both the men and women’s events saw a couple of first place finishes for the Wildcats.

These included Tyler Arroyo who won first place for the men in the high jump with a height of 6.8 feet , and Lia Burrell, who won the women’s triple jump with a mark of 35 feet and 4 inches.

Both the men’s and women’s 4×400 teams took first place after the 45 minute delay.

The men’s 4×400 team of Hasani Barrett, Michael Good, Emilio DeSantis, and Derek Morton finished with a time of 3 minutes and 23.95 seconds.

The women’s 4×400 team consisting of Claire Chappell, Michelle Holt, Jenavieve Turner, and Sheena Blackwell finished with a time of 4:05.21 seconds.

Holt would have another notable performance with a second place finish in the women’s 200-meter dash.

The Wildcats also excelled in the pole vault as the men’s team had four vaulters tie for second.

Randall LeBlanc, Dylan Smith, Zehr Blanco, and Lane Andrews all vaulted over the mark of 14-3.25 in the men’s pole vault.

In the women’s pole vault, Megan Farrell finished second while vaulting over 10-9.

Chico State’s Joseph Ilaoa recorded two second place finishes. One in the shot put with a throw of 14.05 meters and the other in the discus with a mark of 44.9.

The Chico State track team’s next meet will be its own Wildcat Invitational on March 10 at Chico State.