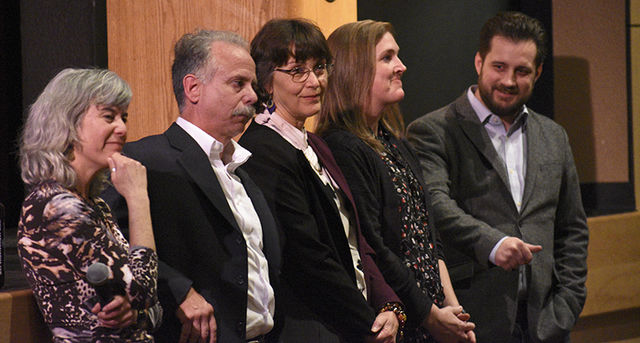 The documentary was broken into six chapters; story, identity, community, security, civil society and the American experiment. In roughly 80 minutes, this film focuses on the communities and cultures around firearms rather than arguing a position on gun violence. To maintain objectivity on the subject, 19 people from different backgrounds, viewpoints and locations were interviewed.

The film’s producer and co-director Sue Hilderbrand said the documentary was locally produced but filmed throughout the nation.

“It was filmed in a lot of different places. We went to New York, Washington D.C., LA, Austin, Dallas and San Jose,” Hilderbrand said. “That’s where we went to get our interviews, but all of the people that have worked on it are local.”

The film also showed the evolution of gun advertisements in American society. According to the film, gun ads from the 1800’s explained how to use firearms whereas gun ads from the early 1900’s connected a man’s masculinity with owning a firearm. Clips from popular movies like Dirty Harry and Die Hard were also played to show how mass media shaped public perceptions of guns. Lastly, gun death statistics from sources like the Center for Disease Control and Prevention were also included in the form of pie charts and graphs.

Co-director Dan Carter said that while the film’s interviews were insightful, gun death statistics were needed to give the documentary credibility.

“We have people who are espousing these views and using these statistics,” Carter said. “In order to support them and give them credibility, we go to second sources or (first) sources where the statistics originated.”

Roughly 700 people attended the event and got an opportunity to voice their opinions in a panel discussion after the film concluded. The panel included five members; Hilderbrand, President Gayle Hutchinson, and three political science and criminal justice professors Darin Haerle, Adam Irish and Alan Gibson. This panel heard questions and comments from 10 audience members.

Lindsay Briggs, a Chico State health and community services professor, began the discussion commenting on the film’s title. Briggs spoke on behalf of her own heritage, the Leech Lake Band of Ojibwe, and read a statement prepared by a group she’s part of called the Indigenous Support Collaborative of Northern California.

While Briggs praised the documentary for its research and objectivity, she also said the title was offensive to native tribes.

“The word Totem is a sacred Ojibwe word. The Ojibwe people speak Anishinaabe and an Anishinaabe word for clan was borrowed and transliterated into English as the word for totem,” Briggs said. “The use of the word totem in the title of this documentary is inappropriate and an example of cultural appropriation.”

Briggs said that while she understood the word totem was used to be “thought-provoking,” she also noted that “intent and impact, particularly in social justice, are two very different things.”

“The image of the firearm leaning against Ojibwe sacred word further reminds us about genocide against natives by early colonists. Both the name of the documentary and it’s visual imagery are deeply painful and ignore native narratives and cultural perspectives which are crucial to understanding the foundation of gun violence in the United States,” Briggs said. “The Indigenous Support Collaborative of Nor Cal request that the filmmakers consider renaming the documentary to remove the harmful and appropriative use of the word totem.”

Hilderbrand acknowledged Briggs statement and told her she would be willing to set up a meeting to discuss the title more.

“We did think about this (word) and we can think some more…At this very moment I stand by it (but) I’m happy to talk to you all about it,” Hilderbrand said. “We’ll set up a time and we’ll absolutely talk it through.”

President Hutchinson commended Hilderbrand on showing the pre-released film and allowing the public to give feedback.

“I want to thank you, Susan, for an incredible opportunity to really see the film in its beginning,” Hutchinson said. “I know there’s a lot of feedback that you received and maybe changes to be made or not made, but what’s important is what we learn.”

Hutchinson later added that no documentary could entirely capture the entire gun violence issue, but American Totem was a great way to open this dialogue.

“With this documentary, I can actually see it serving as a wonderful tool for those who are up and coming through activism,” Hutchinson said. “Our young people (may) say ‘You know what, this was not complete enough, I’m going to step and make another (documentary). And do it so I can fuel the conversation further by taking on another piece that we know is there that we have yet to talk about.’”

An official release date for the film is yet to be determined but to find out more information on the documentary visit the American Totem website or watch the trailer below.