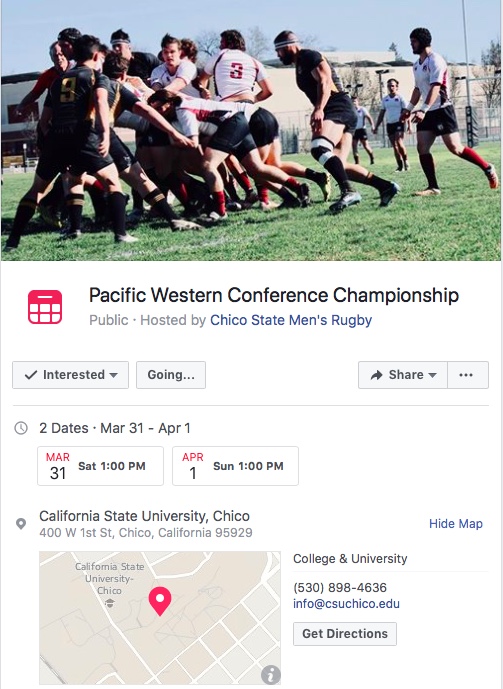 The No. 1 Chico State men’s rugby club is hosting the Pacific Western Rugby Conference Championship this weekend. The Wildcats first square off against No. 4 seed Stanford at 1 p.m. Saturday.

The Wildcats are 6-1 on the season, including a 34-14 regular season win over Stanford on March 10.

“Every time Stanford puts up a good fight, they are really good fundamentally,” said junior Isaac Raichart. “We’re mentally much tougher than they are, and we have better physicality so I think we will run away with it at the end.”

A win on Saturday would put the Wildcats in a matchup against the winner of No. 2 University of Nevada, Reno and No. 3 UC Santa Cruz. The finals matchup will take place at 1 p.m. on Sunday.

A finals matchup against UNR may worry the Wildcats. Their one loss on the year came against Reno on March 17 when they lost 19-5 battling snowy conditions on the road. Despite the loss, because the Wildcats had more points for the year, they got the No. 1 seed over UNR.

“We gotta take Saturday first and beat Stanford,” said senior Kevin Watson. “I would like to get another shot at UNR but UCSC would be great as well.”

Chico State won a majority of their games in blowout fashion, including 51-10 against Fresno State, 64-7 over San Jose State and 65-8 over San Francisco State.

The Wildcats are 3-0 at home this season and look to continue that streak this weekend. It will be the last time for the seniors on the Wildcats to play in front of their home crowd.

“It’s really awesome, I like to hear all the fans out there like screaming and obviously playing on the same field that you practice on every week for the last four years of your rugby career is really awesome,” Watson said.

The Wildcats attribute much of their success to being really fit and having a strong coaching staff.

“First off as a team, we go to Crossfit VCP. We’re pretty fit as a team and that’s definitely been a major key,” Watson said.

“We have Mike Purcell and Lucas Bradbury, who have both coached at a very high level and played very prestigiously throughout the whole world,” Raichart said.

If Chico State wins both games this weekend, they will then travel to Cal State Long Beach to play in the Spring Championship Quarterfinal on April 7 and then onto the semifinals on April 8.

The playoff journey for the Wildcats begins at 1 p.m. against Stanford on the pitch at Chico State directly behind University Stadium.