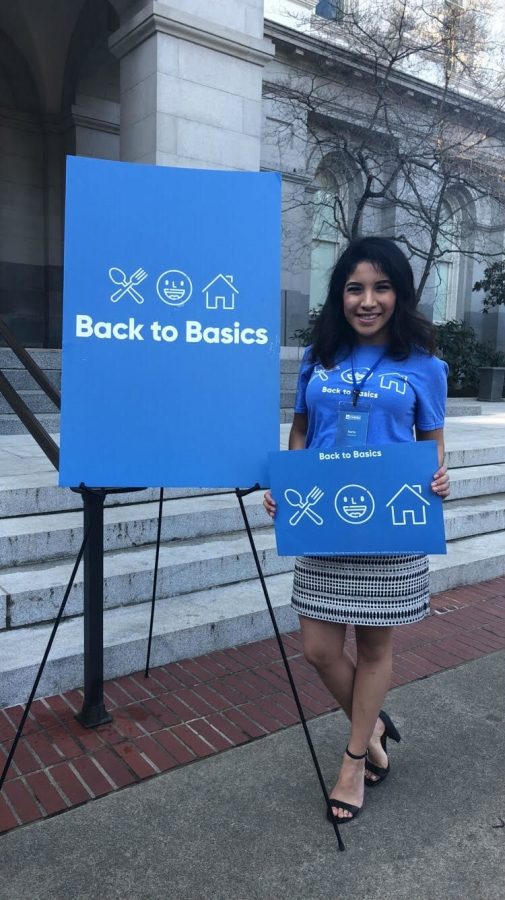 Karla Camacho was lobbying the morning after winning her award. Back to Basics is a student mental health and student housing insecurity campaign that Camacho has lobbied for in the past. Photo credit: Photo courtesy of Karla Camacho

Chico State student Karla Camacho recently won the California State Student Association (CSSA) award for Student Advocate of the Year for her lobbying efforts in support of students who are part of the Deferred Action for Childhood Arrivals program, student mental health, student food and housing insecurity and funding for the CSU system.

On top of her lobbying efforts, Camacho is majoring in agriculture with an option in agriculture science and education and minoring in ethics, justice and policy. She is Chico State’s Associated Students’ director of university affairs and CSSA’s civic engagement officer for the northern region.

One of Camacho’s key issues has been the well being of DACA. She recently traveled to Washington D.C. to lobby California representatives and senators to support the protection of DACA students and further assist programs that support students.

The continuation of DACA has been in serious question since President Trump announced that the program would be phased out and federal legislatures would have to find a way to support the existing DACA students, commonly known as “Dreamers.”

Camacho, a DACA student herself, has also helped Dreamers by organizing support events on campus.

“We realized we had to do a lot of work to ensure that (Dreamer) status was protected,” Camacho said. “With the help of a lot of my peers from Chico State, I was able to get together, along with other officers from CSU, an event called Show of Solidarity. It was basically designed for students to share their stories, but also for us to encourage students to contact Doug LaMalfa and other state representatives of California so they would work towards finding a solution.”

Camacho also encouraged other campuses organize a similar event on the same day, orchestrating a large-scale show of support for Dreamers amongst the CSU system.

In addition to her work in support of DACA students, Camacho recently attended the California Higher Education Student Summit to lobby California elected officials for funding for the CSU system. She met with Assemblymember James Gallagher and Senator Jim Nielson to argue for state funding for student mental health and student food and housing insecurity.

It was at this summit that Camacho won Student Advocate of the Year. Chico State graduate student and CSSA Vice President of University Affairs Michael Pratt was part of the nomination process for Camacho.

“She’s qualified, she’s done so much work for students,” Pratt said. “(The nominating body) are all looking at each other, saying ‘Oh well, who should we vote for’ and we’re all like ‘Karla, Karla, Karla, Karla…’

“There was no doubt in anyone’s mind that she was the most deserving student for the CSU. Which was pretty profound understanding that out of 480,000 students, coming down to within the leadership group 23 to 50 or so student leaders who come to CSSA and consistently do work, that she was the one that all five of us all agreed upon in unison.”

Grayson Boyer can be reached at [email protected] or @theorion_news on Twitter.