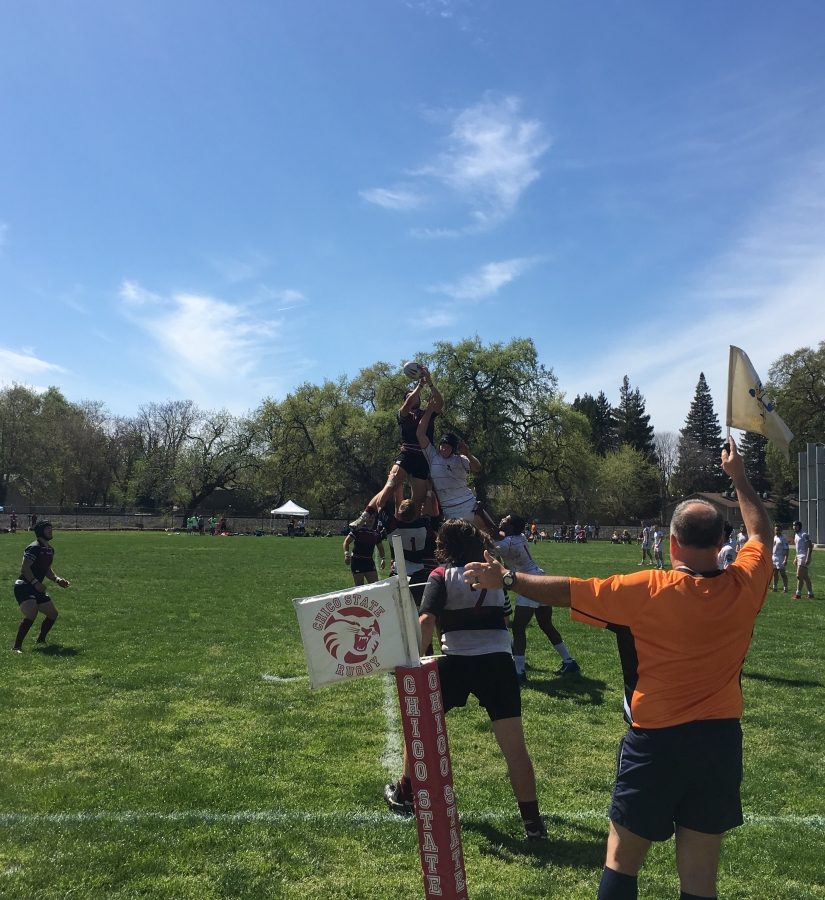 Bryan Laffey tosses the ball in to his teammates during Saturday's game against Stanford. Photo credit: Andrew Baumgartner

The No. 1 ranked Chico State men’s rugby team defeated Stanford 66-19 Saturday afternoon thanks to the teams execution of their game plan.

The last time Chico State faced Stanford they beat them 34-14 in Palo Alto, with a 26-0 run to end the game for the Wildcats, according to pacwestrugby.com. Saturday’s matchup was similar. This time, the Wildcats finished on a 34-0 run.

Chico was led by Michael Warren who had five tries on the day. Next were Samuel Miller, Jake Wiley and Anthony Riley with two tries a piece.

The execution of the game plan was what brought Chico State their success.

“It went well, we executed our plan, we did everything we needed to do and it showed,” said Isaac Raichart, junior. “We have been training a little bit extra this week so that we were better prepared, so it was good that we were playing in the heat, hopefully we match up with (University of Nevada,) Reno.”

The Wildcats last matched up UNR just a couple weeks ago, losing 19-5 for their only loss on the season. They were playing in what Chico State Head Coach Mike Purcell said was a foot of snow. Chico is anxious to get back and face UNR. In addition to the playing conditions, the snow also prohibited four starters from making it and many Wildcats left unhappy.

Chico’s team has a tremendous amount of strength. In scrums, Stanford was constantly being pushed back, and Coach Purcell said he anticipates his team doing the same to Reno Sunday.

According to senior left wing Michael Warren, Chico State will be ready for whoever they play.

“We just come out and execute, it doesn’t matter who we are playing, where we are, or what we are doing,” Warren said. “Saturdays are rugby days.”

“We are going to come out strong tomorrow and get the win.” said fullback Anthony Riley.

Chico State hosts the University of Nevada Reno at 1 p.m. Sunday for the Pacific Western Rugby Conference Championship. The winner goes to Long Beach to compete in playoffs. Following that, comes North Carolina and back then back to California where the finals will be held in Fullerton.